How Trump’s Fed Attacks Pose A Problem For Investors 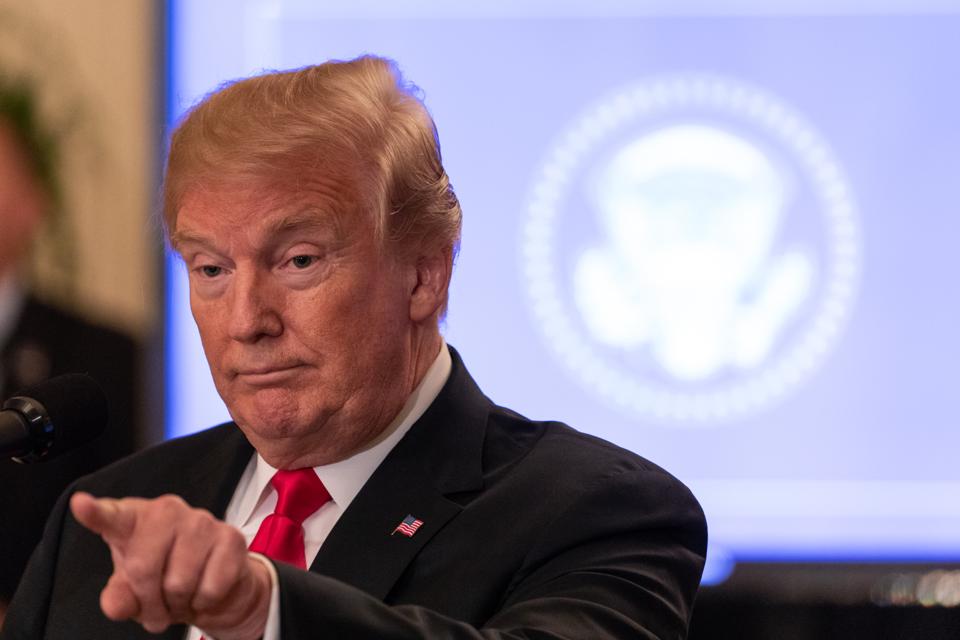 Today, President Trump has weighed in on interest rate policy. In a CNBC interview with Joe Kernen this morning, he said, when asked about rising rates.  “I don’t necessarily agree with it. I’m not thrilled.” “However, at the same time, I’m letting them [the Fed] do what they feel is best.” So President Trump did make it clear that he apparently respects the autonomy of the Federal Reserve, but still criticised their decision making. On Twitter, this morning he was more blunt concluding a morning Tweet with, “Debt coming due & we are raising rates – Really?”

Issues With The Strong Dollar

This was, in part, because as Trump explained in his CNBC interview, he is concerned that interest rates in Europe are at much lower levels. This is true. German 10 year bonds yield under 0.5% and similar U.S. bonds yield almost 3%. This is a material difference, though European growth expected to be softer than the U.S. this year on recent IMF forecasts. Higher interest rates typically causes investor money to flow from the Euro to the U.S. Dollar where it can earn a better return, which then raises the value of the dollar. A strong dollar can be good for U.S. consumers, because products that originate overseas become cheaper when paid for in dollars. Yet, it’s typically bad for larger U.S. firms such as members of the S&P 500, because U.S. products sold abroad become more expensive due to the same change in the exchange rate, cutting sales and hurting profits. There are plenty of other effects to consider too. So it’s not clear cut that a strong dollar is a bad thing. For example, on the other hand, a weak dollar and loss of confidence in the U.S. economy would more likely be a bigger problem. Yet, there is logic behind Trump’s statement, especially from the perspective of larger U.S. firms.

Issues With The Interest Rate On Government Debt

Even though the merits and drawbacks of dollar policy can be debated, Trump’s Twitter statement that interest rates should be held low to keep payments on government debt down does not hold up. At the extreme, the price of government debt will ultimately be set by the trading activity in the market, not policy makers. The robust link between Fed rates and yields on government debt only holds because the Fed manage the process relatively well, and even then, the Fed only sets short-term rates with any accuracy. That the Fed is not truly all powerful would be a painful lesson to learn. In recent history, the U.S. has generally managed its debt and currency very well, which is why the U.S. government is able to borrow money so cheaply relative to many other countries. This is also why the dollar has been such a robust currency for international transactions and financial activity. However, trying to manipulate the markets to reduce debt service cost would be a disastrous move that would very likely fail or have unexpected consequences for the dollar, inflation and/or employment. There have been many examples in history where policy makers have attempted to hold currencies or interest rates at artificial levels that didn’t make economic sense, and the market ultimately wins out.

However, central bank independence is a more important prize, than the direction of rates or value of the U.S. dollar in any particular cycle. Having politicians set interest rates does not typically end well for sensible economic management. This is because for politicians of any party, it can be tempting to let the economy run a little hotter than it should with an election on the horizon. This may fuel growth in the short-term, but can ultimately lead to a more painful economic fall on the other side, leaving the economy far worse off. This is one reason why the President can appoint the Fed Chair periodically, but is not involved in Fed decision making.

As a prior Fed chair said back in 1955  “The Federal Reserve…is in the position of the chaperone who has ordered the punch bowl removed just when the party was really warming up.” Clearly, the role of the Fed is not an especially fun or easy one. For example, at the moment the good times are rolling for the economy, with low unemployment and decent growth. However, we have seen historically many times that economic cycles are a fact of life, and in various cases the Fed has actually not raised rates fast enough. In that context, telling the Fed to hold back is not helpful.

Another strange global phenomenon is that interest rates are incredibly low by historical standards today. Of course the Fed is raising rates, and if we look  at Europe rates seem high, but the Fed’s target rate remains extremely low today at below 2%, especially when combined with a robust economy well clear of its most recent recession. This is potentially a problem, because one weapon against a recession is to cut rates sharply.

For example, in the 2008-9 recession, the Fed cut rates around 5% in absolute terms, and even though the downturn was severe, that’s a pretty Fed response when recession hits. In fact, looking back to the 1960s we haven’t gone into a recession with rates of at least at 3% and often far higher. So there is an argument that rates should be at a more normal level, so that ample ammunition is available to the Fed in the event the economy should weaken, as it inevitably will at some point in the coming years.

Thus far, Trump’s remarks have had limited market impact, and it appears that he does fundamentally want the Fed to do its job, given he appointed Powell as Fed Chair just 5 months ago. Indeed, the Fed has very clear logic for raising rates and could even be moving too cautiously, though we’ll only know in retrospect. Raising rates is never an easy decision, and typically comes with side effects, but trying to manage Fed decisions based on currency goals or even worse, debt service costs, is a problem when the Fed’s main focus is on stable employment and low inflation, which are critical to the U.S. economy. Hopefully, President Trump’s remarks are a one-off and this doesn’t become a theme, but persistent pressure on the Fed, could ultimately hurt both stock and bond markets if low rates fail to smooth out economic growth and the Fed ends up with less ‘dry powder’ to cut rates when the next recession hits.