Trump (Again) Admits His Son Met With Russian Lawyer To Get Dirt On Clinton : NPR 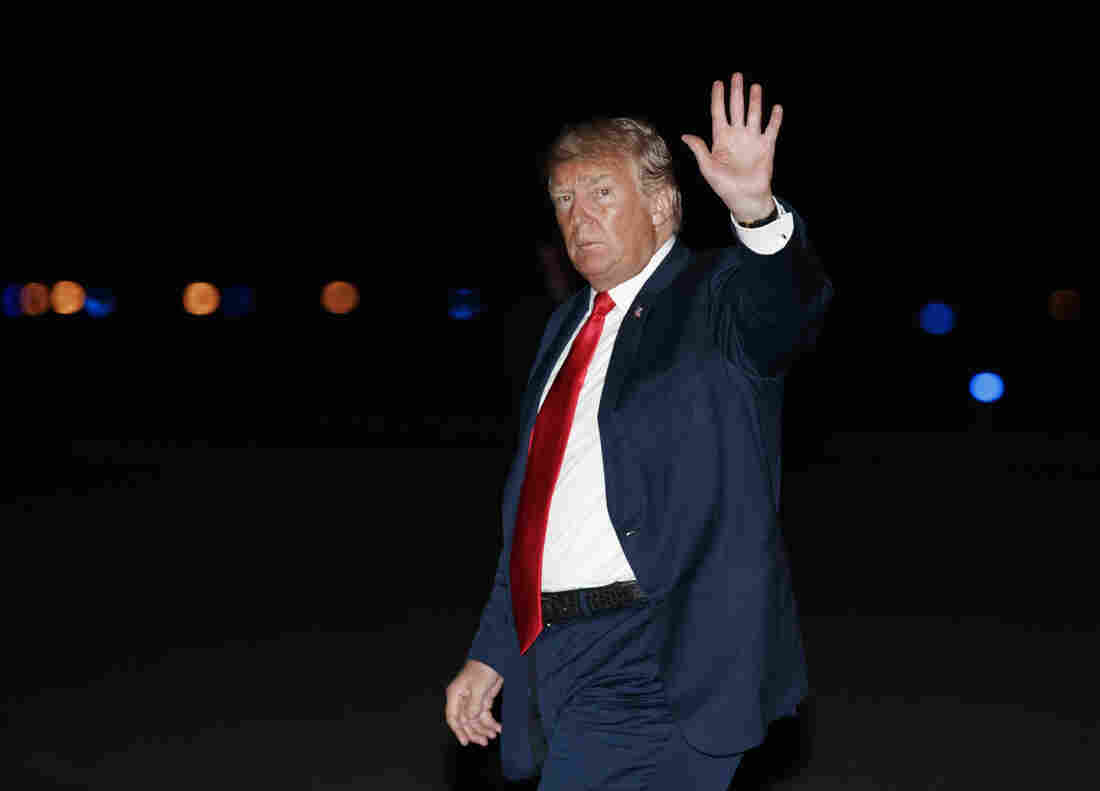 President Donald Trump is seen boarding Air Force One on Saturday in New Jersey, the day before he reiterated his stance that the focus of Donald Trump Jr.’s 2016 Trump Tower meeting was to collect incriminating information on presidential opponent Hillary Clinton. 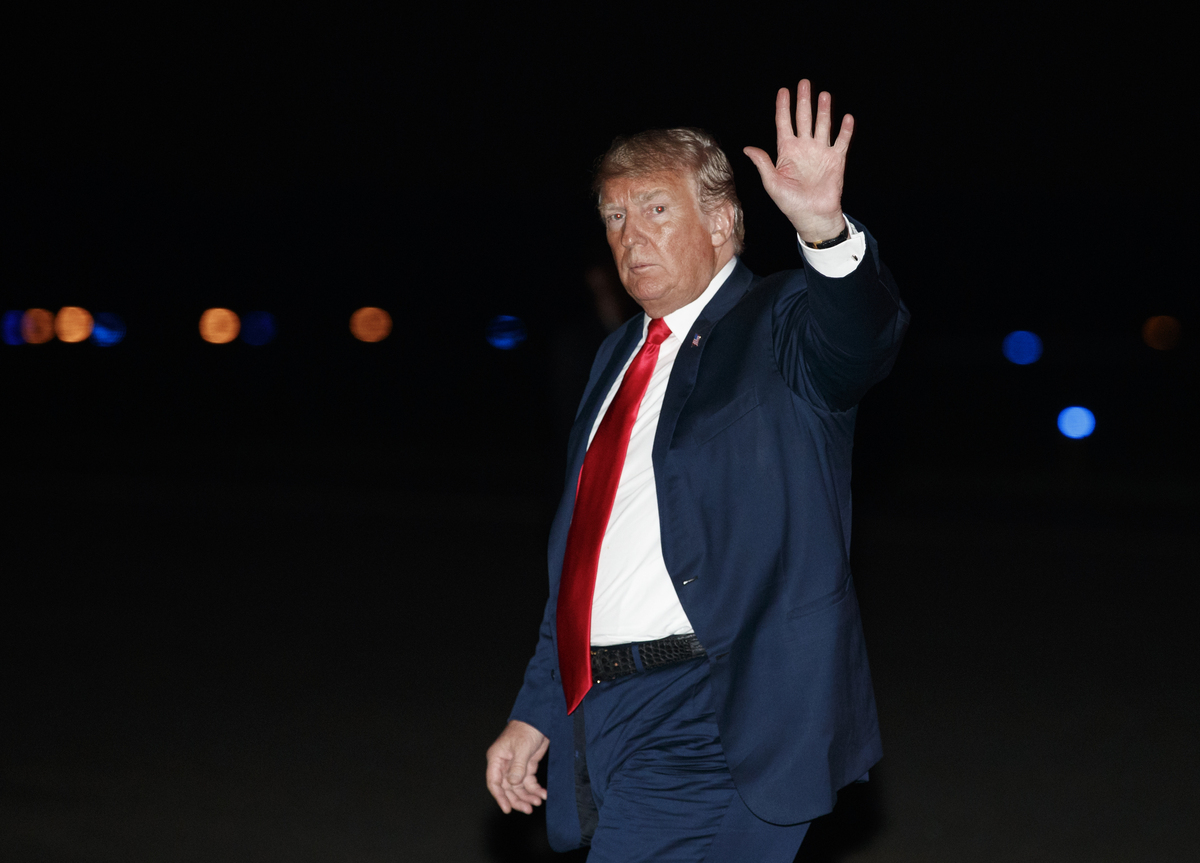 President Donald Trump is seen boarding Air Force One on Saturday in New Jersey, the day before he reiterated his stance that the focus of Donald Trump Jr.’s 2016 Trump Tower meeting was to collect incriminating information on presidential opponent Hillary Clinton.

It was a tweet that set off a storm. Was President Trump admitting to collusion between his campaign and Russia? Was he stipulating that the now notorious June 2016 Trump Tower meeting arranged by his son Donald Trump Jr. really was all about getting dirt on Hillary Clinton from a Kremlin-linked Russian lawyer and not adoption issues as President Trump had earlier claimed?

“This was a meeting to get information on an opponent, totally legal and done all the time in politics – and it went nowhere,” the president wrote in tweet early Sunday.

He concluded the tweet by saying, “I did not know about it!”

Fake News reporting, a complete fabrication, that I am concerned about the meeting my wonderful son, Donald, had in Trump Tower. This was a meeting to get information on an opponent, totally legal and done all the time in politics – and it went nowhere. I did not know about it!

While Trump and his legal team insist there was nothing illegal and “no collusion,” Trump’s apparent-tweeted admission on Sunday was, it turns out, also nothing new. It’s the very talking point the president and his aides settled on more than a year ago, after their initial claim that the meeting was just about adoptions didn’t hold up.

It has been widely reported that the Trump Tower meeting and statements from the President and his son about that meeting are being examined as part of Special Counsel Robert Mueller’s investigation into Russian interference in the 2016 election and possible connections to the Trump campaign.

“I think from a practical standpoint most people would’ve taken that meeting. It’s called opposition research, or even research into your opponent,” Trump said at a press conference in July 2017 when asked why his son would take the meeting rather than alert the FBI. “That’s very standard in politics. Politics is not the nicest business in the world, but it’s very standard where they have information and you take the information.”

Trump went on to say that nothing came from the meeting. A few days later Trump tweeted the same defense.

Most politicians would have gone to a meeting like the one Don jr attended in order to get info on an opponent. That’s politics!

Political operatives on both sides of the aisle quickly said, no, they wouldn’t have taken a meeting with a foreign operative and would have reported the offer to authorities.

As a reminder, the offer came to Trump Jr. by way of Rob Goldstone, a music publicist who knew the Trumps through the Miss Universe pageant. Goldstone represented the Russian pop singer Emin Agalarov, whose father is a real estate developer with ties to Russian President Vladimir Putin.

“Emin just called and asked me to contact you with something very interesting,” Goldstone wrote to Trump Jr. in early June 2016.

“The Crown prosecutor of Russia met with his father Aras this morning and in their meeting offered to provide the Trump campaign with some official documents and information that would incriminate Hillary and her dealings with Russia and would be very useful to your father,” Goldstone continued, adding this was “part of Russia and its government’s support for Mr. Trump.”

Trump Jr. was receptive, responding in part, “if it’s what you say I love it especially later in the summer.”

Once those emails were released, Trump and his team had little choice but to say the meeting’s purpose was to get dirt on Clinton, even if they claimed Veselnitskaya didn’t bring any with her and instead focused Russia’s halt in the US adoption of Russian children in retaliation for sanctions imposed by the US. Trump’s lawyers also eventually admitted that Trump Jr. initial statement claiming the meeting had been about adoptions and nothing more had been dictated by President Trump himself from Air Force One.

What is new from the president’s comments Sunday is his declaration that the meeting is “totally legal.” It may not be so cut and dry. Federal campaign finance law states it is illegal for a foreign national to “directly or indirectly, make a contribution or a donation of money or other thing of value.”

“Hard to see how there is not a serious case here of solicitation. Trump Jr. appears to have knowledge of the foreign source and is asking to see it,” Rick Hasen, a campaign finance law expert wrote on his blog last year. “Such information can be considered a ‘thing of value’ for purposes of the campaign finance law.”

Later Sunday, Jay Sekulow, one of the president’s lawyers, defended the 2016 meeting. “The question is: How would it be illegal?” Sekulow asked on ABC News’ “This Week,” saying no laws prohibit campaign aides from meeting with foreign agents. “Nobody’s pointed to one.”

Trump has repeatedly expressed his desire to see the Mueller investigation shut down. On Wednesday, he tweeted that Attorney General Jeff Sessions — who recused himself last year from all matters related to the Justice Department investigation — should “stop this Rigged Witch Hunt right now, before it continues to stain our country any further.”

It’s unclear whether Trump’s latest admission will affect Mueller’s probe in any way. But, as NPR’s Brian Naylor reports, if Mueller could prove Trump was aware of the meeting in advance, “or cast doubt on denials by Trump and Trump Jr., it would be a dramatic addition to Mueller’s investigation into Russian election interference in the 2016 presidential race and possible collusion by the Trump campaign.”