A man raises his arm in a Nazi salute in response to heckling from leftists at a protest gathering the day after a fatal stabbing by migrant suspects triggered large protests in the city of Chemnitz in eastern Germany. 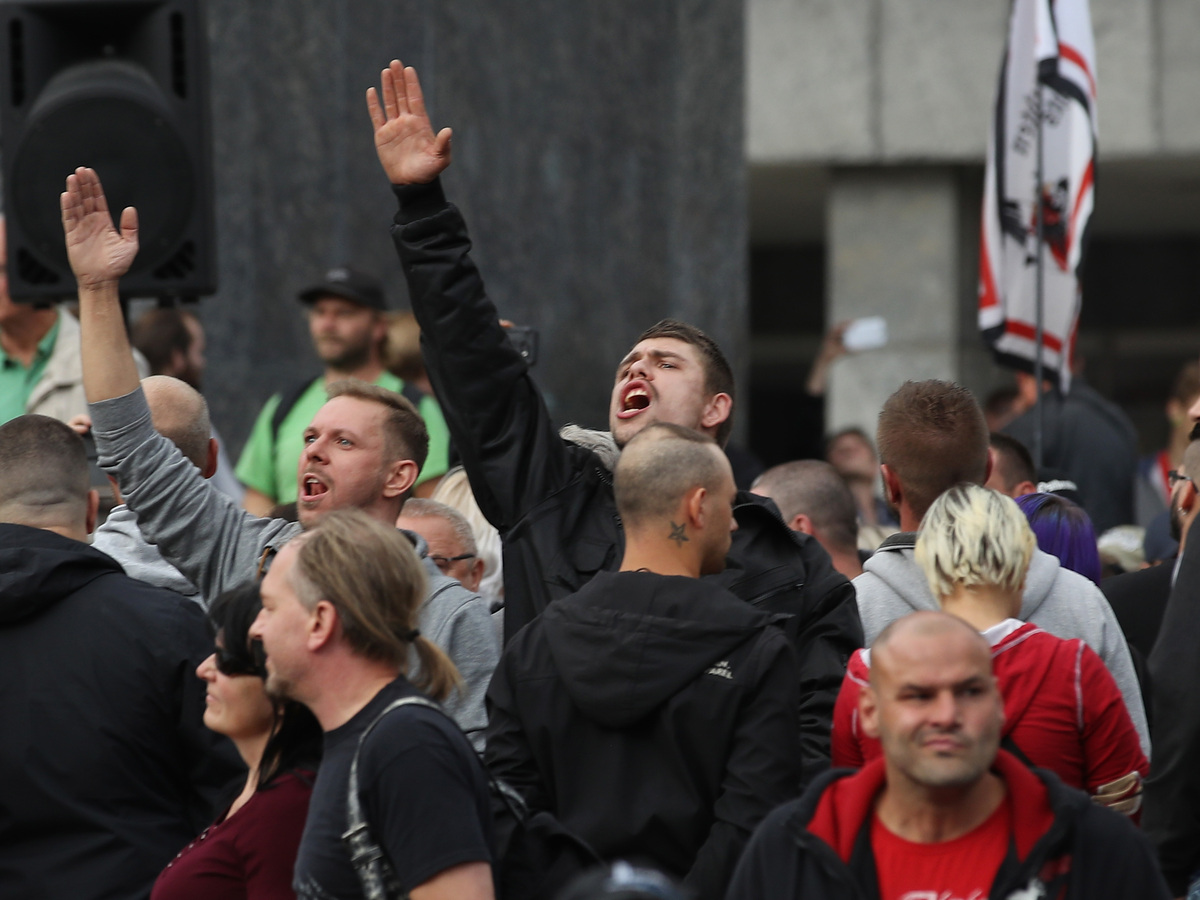 A man raises his arm in a Nazi salute in response to heckling from leftists at a protest gathering the day after a fatal stabbing by migrant suspects triggered large protests in the city of Chemnitz in eastern Germany.

Hundreds of right-wing demonstrators took to the streets in the eastern German city of Chemnitz to demand that foreigners leave the country following the arrest of two migrants in a fatal stabbing incident.

The protesters — some masked and thrusting Hitler salutes — chanted “Close the borders!” and carried signs that read “Stop the asylum flood.”

“This is our city!” they also chanted.

The dueling sides hurled pyrotechnics and other objects at each other Monday night, causing several injuries, as a police tried to keep them separated, according to Deutsche Welle.

Police and media reports estimated that there were about 1,000 anti-immigrant protesters and about an equal number of counterprotesters.

The protest followed a slightly smaller gathering of right-wing protesters in the city on Sunday.

On Sunday, police reported “a series of injuries including a Bulgarian man who was threatened, two Afghan teenagers who were attacked and another person who was followed,” Handelsblatt Global reports.

The incident that triggered the protests stems from the arrest on Sunday of two apparent migrants, a 23-year-old Syrian man and a 22-year-old Iraq, in the death of a 35-year-old carpenter identified as Daniel H., who succumbed to multiple stab wounds following the attack. Two other men were reportedly seriously injured.

Police said the knife attack involved “several people of different nationalities,” and occurred on the sidelines of the city’s annual street festival.

The suspects stabbed the victim several times “with no justifiable reason,” prosecutors said, according to Deutsche Welle.

The Associated Press notes that in Chemnitz, a city of 246,000 that is situated in the former East Germany, “almost a quarter of the voters supported the far-right Alternative for Germany party” during last year’s elections.

Deutsche Welle reports that Monday night’s protests “began calmly enough, as a heavy police presence kept the two sides apart and the groups confined themselves to jeering at each other beneath the gaze of Chemnitz’s colossal Karl Marx monument. But by around 9 p.m., when the demonstrations began to move, six people were injured by fireworks and rocks thrown by members of both camps who were wearing the customary black hooded tops, gloves, face coverings and dark glasses.”

Chancellor Angela Merkel, whose fragile coalition government nearly came apart last month over the issue of asylum-seekers, responded to the violence as well as video posted to social media that showed some protesters who appeared to target individuals due to their ethnicity.

Merkel’s office issued a statement condemning violence after the initial attack and protest on Sunday.

“What was seen yesterday in parts of Chemnitz and what was recorded on video has no place in our country,” spokesman Steffen Seibert told reporters in Berlin.

“People ganging up, chasing people who look different from them or who come from elsewhere … is something we won’t tolerate,” he said. “This has no place in our cities, and I can say for the German government that we condemn this in the sharpest possible manner.”

The AP reports that Germany’s Central Council of Jews also condemned the violence, saying it is a “civic duty to stand against the right-mob.”