On Tuesday, after weathering a self-inflicted wound caused by his unwillingness to acknowledge in any meaningful way the death of the late Sen. John McCain, Trump took to Twitter at 5:24 a.m. to send this message:

“Google search results for ‘Trump News’ shows only the viewing/reporting of Fake New Media. In other words, they have it RIGGED, for me & others, so that almost all stories & news is BAD. Fake CNN is prominent. Republican/Conservative & Fair Media is shut out. Illegal? 96% of results on ‘Trump News’ are from National Left-Wing Media, very dangerous. Google & others are suppressing voices of Conservatives and hiding information and news that is good. They are controlling what we can & cannot see. This is a very serious situation-will be addressed!”

So. The President of the United States is alleging a broad-scale conspiracy to filter news by the largest search engine in the world. His “evidence”? That when he types “Trump News” into Google, it produces “only the viewing/reporting of “Fake News Media.”

Trump is referencing an article by PJ Media’s Paula Bolyard published over the weekend with this headline: “96 Percent of Google Search Results for ‘Trump’ News Are from Liberal Media Outlets.” (Lou Dobbs, a host on Fox Business and a Trump favorite, talked about the piece on Monday night.) Here’s how Bolyard arrived at that number: She went to the Google “News” tab, typed in “Trump News” and then, using conservative journalist Sharyl Attkisson’s media bias chart, analyzed the publications that popped up.

“I expected to see some skewing of the results based on my extensive experience with Google, but I was not prepared for the blatant prioritization of left-leaning and anti-Trump media outlets. Looking at the first page of search results, I discovered that CNN was the big winner, scoring two of the first ten results. Other left-leaning sites that appeared on the first page were CBS, The Atlantic, CNBC, The New Yorker, Politico, Reuters, and USA Today (the last two outlets on this list could arguably be considered more centrist than the others).

“Not a single right-leaning site appeared on the first page of search results.”

I replicated this same search for “Trump News.” Here’s what my first page of results looked like: 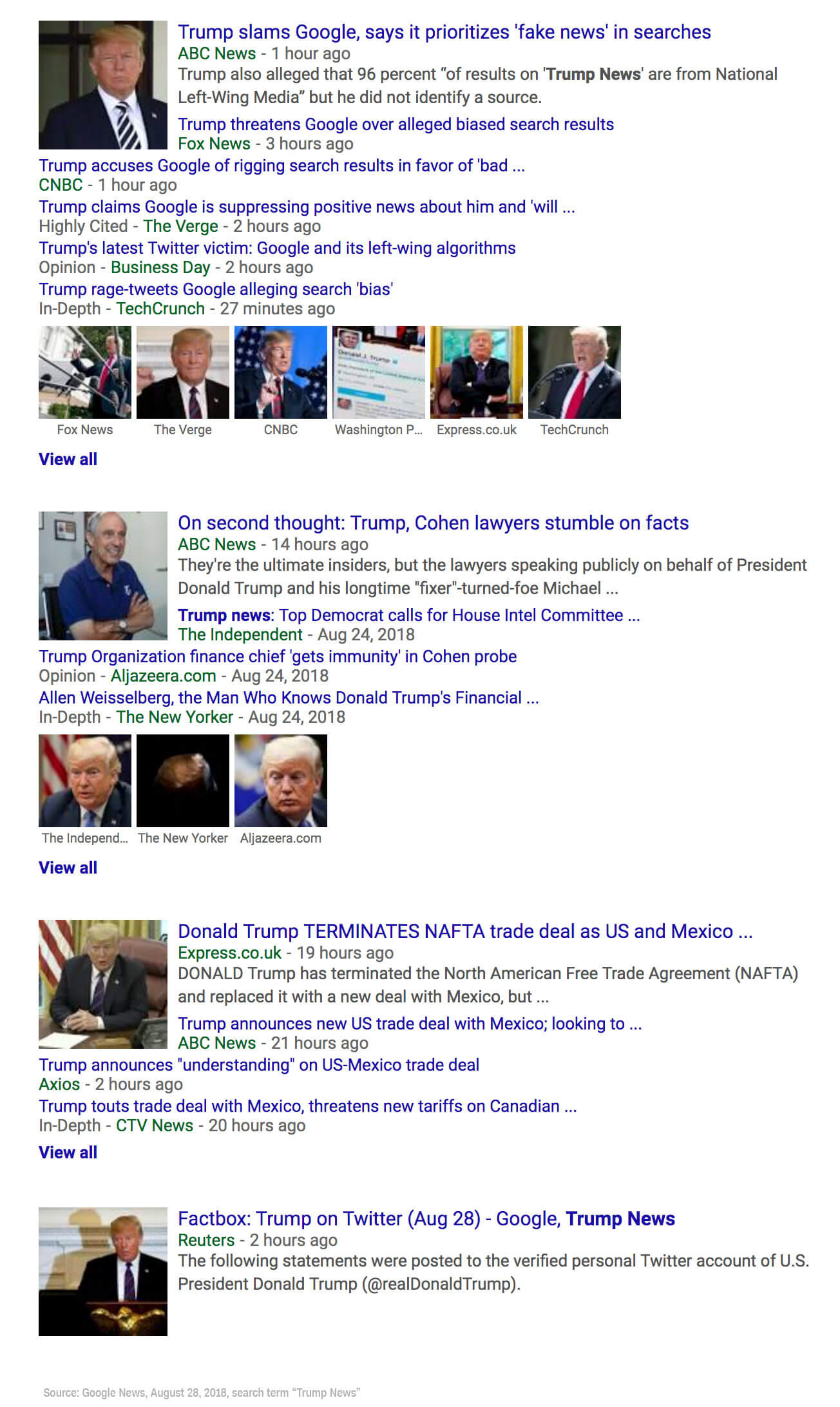 The first story was by ABC News, the second by Fox, the third by CNBC. According to the Attkisson model, that’s two liberal publications and one conservative one.

There’s a few problems here — with both the PJ Media piece and the Attkisson media chart on which it’s based.

First, Attkisson’s “media bias” chart is not exactly an objective measure of journalistic fairness and integrity. Every major mainstream media outlet in the country — from CNN to The New York Times to The Washington Post to Bloomberg is cast as left-leaning. Infowars, Alex Jones’ conspiracy website, is placed in the center-right. Some conservatives will agree. I’m not going to convince them. But, if you believe that InfoWars has the same editorial processes to get something published as The Washington Post, I can guarantee you that you are wrong.

Second, Bolyard herself makes clear how Google’s search engine works — and how that has zero to do with a publication’s ideology. She writes:

“Google is secretive about its algorithm, although the company does say that a variety of factors — around 200 of them, according to Google — go into how pages are ranked. In fact, a whole science has developed — called search engine optimization (SEO) — that purports to help sites become more visible in Google search results. Factors such as the relevance of the topic, the design of the website, internal and external links, and the way articles are written and formatted all can affect a site’s Google traffic. Google is constantly tweaking their algorithm, and a website’s traffic prospects can rise or fall depending on the changes. PJ Media’s Google search traffic, for example, dropped precipitously after a May 2017 algorithm change. We have yet to recover the lost traffic. Other conservative sites have reported similar drops in traffic.”

What Bolyard is suggesting is that because we don’t know the algorithm that Google uses to populate its “News” tab, it’s possible that they could be purposely editing out conservative sites. Because we can’t rule it out, then no one can say what she’s suggesting isn’t true.

(I’d point you to lots and lots of smart pieces about how the Google News algorithm works — and why it has very little to do with ideology.)

This is the essence of all conspiracy theories: You can’t prove beyond a shadow of a doubt that I am wrong, so I just might be right! The best conspiracy theories are perfect machines in that regard; any attempt to debunk them will a) necessarily come up short because definitive proof cannot and will not exist and b) the very act of attempting to debunk will be seen as a surefire sign you are in on the conspiracy!

A Google spokesperson responded Tuesday to Trump’s tweet, saying in a statement: “When users type queries into the Google Search bar, our goal is to make sure they receive the most relevant answers in a matter of seconds. Search is not used to set a political agenda and we don’t bias our results toward any political ideology.”

The statement continues: “Every year, we issue hundreds of improvements to our algorithms to ensure they surface high-quality content in response to users’ queries. We continually work to improve Google Search and we never rank search results to manipulate political sentiment.”

What’s remarkable is that even in Bolyard’s attempt to prove her point, she provides an insight that fundamentally undermines it. “I performed the search a multiple times using different computers (registered to different users) and Google returned similar results,” she writes. “While not scientific, the results suggest a pattern of bias against right-leaning content.”

That’s like saying, “I’m not a doctor and have no medical training, but I am pretty sure you are going to die in the next week.” Thanks for your opinion but, like, it’s just an opinion. And not an expert opinion. Or one with, you know, science or methodology behind it.

What the President of the United States is peddling to his 54 million Twitter followers, then, is an anecdote hung on a flawed analysis of media partisanship. The conclusions Bolyard’s piece draws are entirely based on what she believed going into her “investigation.” If every major media outlet in the country is biased, and Google uses the size of media outlets and the frequency they are cited as sources in its search algorithm (and its does!), then voila, all searches conducted via Google are biased.

Like I said: Conspiracy theories are so pervasive because many are simply impossible to prove false. Which, of course, doesn’t make them true.