No role for Congress in investigating anti-Trump op-ed 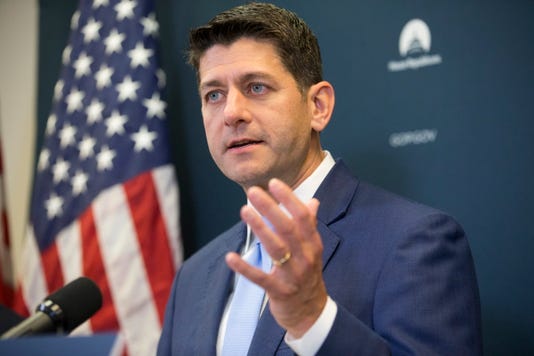 Speaker of the House Paul Ryan speaks during a news conference on Capitol Hill in Washington, D.C. July 24, 2018.(Photo: EPA-EFE)

WASHINGTON – House Speaker Paul Ryan said Thursday he doesn’t see a role for Congress in investigating the identity of the author of a New York Times op-ed blasting President Donald Trump as amoral, despite outrage from the president and his allies over the essay.

Ryan, a Wisconsin Republican, replied, “Not that I know of,” when asked by a reporter if Congress should try to identify the anonymous author of the essay, who was described by The New York Times as a senior administration official.

However, Ryan said the author was “living in dishonesty” and should consider whether they want to stay in their role. “That doesn’t help the president. So if you’re not interested in helping the president, you shouldn’t work for the president, as far as I’m concerned,” he said.

The official described a “resistance” inside the administration and said aides were working to thwart the president’s decisions when they deemed them misguided or potentially harmful to the nation.

“It may be cold comfort in this chaotic era, but Americans should know that there are adults in the room. We fully recognize what is happening. And we are trying to do what’s right even when Donald Trump won’t,” the unnamed official wrote.

Rep. Mark Meadows, chairman of the conservative House Freedom Caucus and a strong ally of Trump’s, told USA TODAY on Thursday he thought Congress should consider getting involved.

“We’re looking right now at what’s the appropriate action from a legislative standpoint to review what’s happened,” said Meadows, R-N.C. “It is alarming when you have people…that would suggest resistance to the president that they’re serving, especially in light of discussion that may go into the national security realm.”

It wasn’t immediately clear how much support Meadows would get, even from his usual allies. One of Trump’s biggest defenders, Rep. Matt Gaetz, R-Fla., had no plans to push for hearings, according to spokesman Devin Murphy.

Murphy said a hearing “gives too much weight to a non-story” and “also raises red flags regarding First Amendment freedoms.”

Rep. Doug Collins, R-Ga., a member of the GOP leadership team who is running to be chairman of the House Judiciary Committee, said it wasn’t the role of Congress to intervene even though the unknown op-ed author had “zero personal integrity.”

“I’m a simple southern kid,” he told USA TODAY. “If you’re drawing a paycheck from somebody, then you should have the personal integrity to say I’m either going to quit or put my name on a complaint.”

Collins said there isn’t much Congress can do because of the op-ed author’s constitutional right to free speech.

“The great thing about the First Amendment, I guess, is people can say whatever they want to say and they can say it with anonymity,” he said.

More: Anonymous senior Trump official blasts president as erratic and amoral: ‘I am part of the resistance’

More: Eight things to know about the 25th Amendment