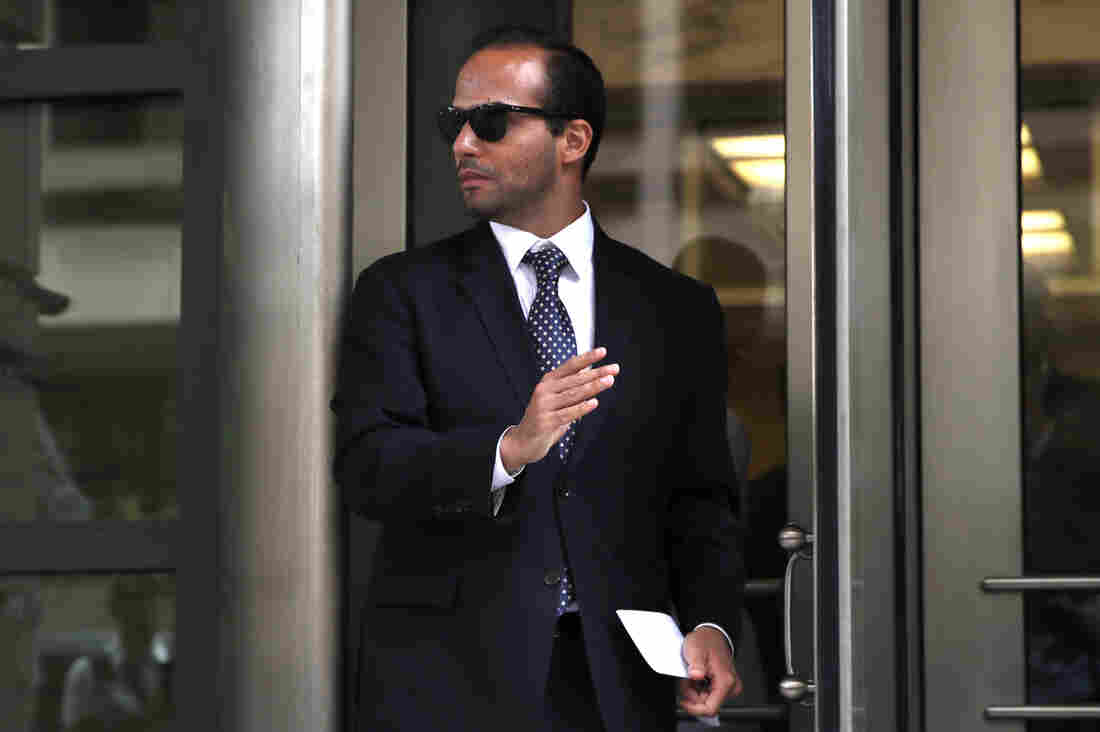 Former Trump campaign aide George Papadopoulos, whose actions triggered the Russia investigation, leaves federal court after he was sentenced to 14 days in prison on Friday. He had pleaded guilty to lying to the FBI. 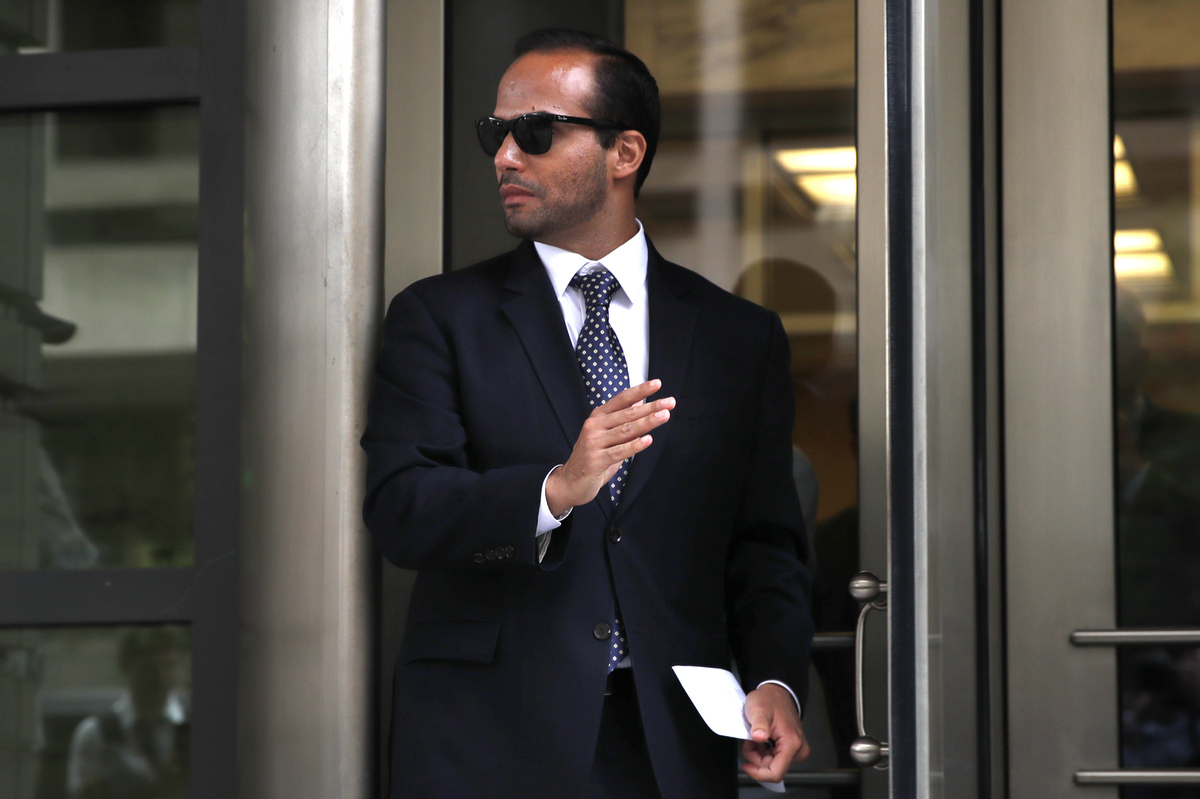 Former Trump campaign aide George Papadopoulos, whose actions triggered the Russia investigation, leaves federal court after he was sentenced to 14 days in prison on Friday. He had pleaded guilty to lying to the FBI.

The man whose case helped launch the sprawling investigation of Russian election interference that has engulfed the White House was sentenced to 14 days in prison on Friday.

George Papadopoulos, 31, pleaded guilty last year to lying to the FBI to conceal his contacts with Russians and Russian intermediaries during the presidential campaign.

A federal judge also sentenced Papadopoulos to one year of supervised release and imposed a fine of $9,500.

The operatives whom Papadopoulos met offered him “dirt” on Hillary Clinton and “off-the-record” meetings in overtures he discussed with leaders of Donald Trump’s campaign.

His lawyers say Papadopoulous acted out of a “misguided sense of loyalty to his master” and to preserve his career options in the new administration.

“He was unsophisticated, he was naïve and he was a fool,” said attorney Thomas Breen. Papadopoulos didn’t know “he was being worked by a pro”— a spy.

Breen said his client “does not know if he passed it” — the offer of dirt on Hillary Clinton” — to anybody in the Trump campaign. He can guess, but he’s not sure.”

Papadopoulos first lied to the FBI a week after Trump was inaugurated, after the president had begun to denounce “fake news” and dismiss any notion that Russia had attacked the 2016 election. So Papadopoulos followed that messaging before eventually admitting the truth to investigators, his lawyers say.

“The president of the United States hindered this investigation more than George Papadopoulos ever could,” Breen said.

Breen also pointed out the “unusual” nature of the case, describing how in one meeting with investigators at the FBI, Papadopoulos looked up to see photos of Trump and Attorney General Jeff Sessions — his former bosses on the campaign — on the wall in the waiting room.

Prosecutors working for Justice Department special counsel Robert Mueller said Papadopoulos undermined their investigation and deprived them of a chance to ask a professor of diplomacy based in London how he knew Russians had obtained the “dirt” on Trump’s rival, Hillary Clinton, in the form of thousands of emails.

“In this case, the defendant deliberately and repeatedly lied to agents of the FBI in the course of a highly significant investigation … He chose to lie again and again to advance his personal interests to get a high level position in the new administration,” said Andrew Goldstein of the Justice Department.

Ultimately, Papadopoulos was never hired for a job in the administration and Trump has distanced himself from him.

But because of the lies, Goldstein said, the authorities had to “painstakingly piece together” evidence of what really happened, by reviewing 100,000 emails and electronic data. Only then could they confront Papadopoulos.

The Russian outreach to Papadopoulos was part of a sweeping active measures campaign aimed at the United States and also included overtures toward other political operatives, cyberattacks and agitation on social media.

In requesting that Papadopoulos serve some prison time, government lawyers said he and his wife had participated in media interviews riddled with misstatements.

Far from cooperating to energize the special counsel probe, argued prosecutors Goldstein, Jeannie Rhee and Aaron Zelinsky, Papadopoulos and his wife instead gave life to a false narrative about them and the seriousness of his offense.

Papadopoulos said he realizes now that what he did was wrong.

“In January 2017, I made a terrible mistake for which I have paid dearly and I am terribly ashamed,” he said. “My entire life has been turned upside down.”

He added that he hoped to signal to other witnesses that “this investigation has global implications and the truth matters.”

Federal Judge Randy Moss acknowledged the time and energy this had cost the government.

“It took six months before Mr. Papadopoulos corrected the record and he did so in the face of proof that he lied,” he said. But the judge called the sentence he’d handed down on Friday appropriate.

“Just the process of having to go to prison will have a strong impression on him for the rest of his life,” he said.

More than a “coffee boy”

Papadopoulos was once described as a “coffee boy” to the Trump campaign. But he attended foreign policy meetings with candidate Trump and then-Sen. Jeff Sessions, among others.

His lawyers said that Papadopoulos had suggested brokering a meeting between Trump and Russian President Vladimir Putin in 2016 and that Trump “nodded with approval,” according to a court filing last month.

Defense lawyers Breen, Todd Pugh and Robert Stanley argued that the young energy consultant was merely “out of his depth” in dealing with the Russian operatives.

Trump appeared to respond to the sentencing on Friday with a Twitter post that repeated his argument that the Russia investigation is groundless.

But the top Democrat on the Senate intelligence committee, Mark Warner of Virginia, said on Friday that Papadopoulos’ sentencing confirmed that Mueller’s work is real and Warner said he has questions of his own for Papadopoulos.

“As an influential foreign policy adviser to the Trump campaign, Mr. Papadopoulos was informed that Russia had ‘dirt’ on Hillary Clinton in the form of ‘thousands of emails’ at a critical time during the campaign,” Warner said.

“I still have significant questions about how high that information went, and I know the Senate intelligence committee would like to hear directly from Mr. Papadopoulos.”

Papadopoulos was living in London at the time he joined the Trump campaign, one of a number of advisers recruited at a time when Trump was trying to establish his bona fides and under pressure to name a team of foreign policy advisers.

The FBI began investigating Russian’s election interference after getting a tip that Papadopoulos had dished about his Russian connections to an Australian diplomat during a night of heavy drinking.

The Australian notified his government, which notified the United States.

That sparked a counterintelligence investigation that has became the ongoing effort led by former FBI Director Mueller to get to the bottom of Russia’s attack on the 2016 election — and whether any Americans conspired with those efforts.

Papadopoulos was the key to discovering that, the government says.

“His arrest and prosecution served as a notice to all that this was a serious investigation,” defense lawyers wrote. “He was the first domino, and many have fallen in behind.”