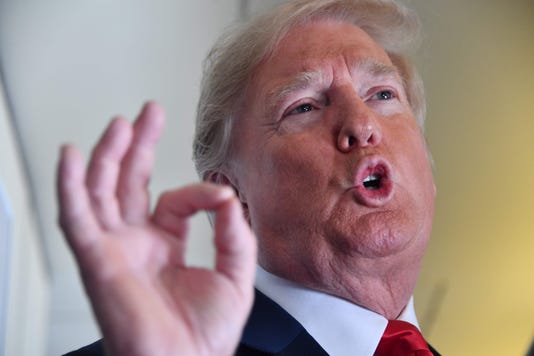 President Donald Trump speaks to the press aboard Air Force One Friday as he travels to Fargo, North Dakota.(Photo: Nicholas Kamm, AFP/Getty Images)

WASHINGTON – President Donald Trump has asked Attorney General Jeff Sessions to investigate the anonymous author of a New York Times opinion piece that criticized the president as reckless and amoral.

Trump has demanded that The New York Times disclose the author of the essay, described by the newspaper as a senior administration official. The writer said aides had been working to thwart decisions by the president they deemed misguided. Trump said revealing the writer’s name was in the interests of national security.

“I think Jeff should be investigating who the author of that piece was, because I think it’s national security,” Trump told reporters aboard Air Force One.

Trump said the senior administration official probably has a security clearance and has access to high-level meetings on national security strategy. “I don’t want him in those meetings. We’re looking at it very strongly from a legal standpoint,” he said.

Trump also renewed his call for Congress to pass stricter libel laws – something that has historically been governed by state law.

“I don’t mind criticism. I handle it and I fight back, if you didn’t notice over the years, but here is criticism where you can’t fight back because you have somebody doing it anonymously,” he said.

Trump told a rally in Billings, Montana, Thursday that the publishing of the op-ed was “treason,” but predicted that the source would turn out to be “fairly low level.”