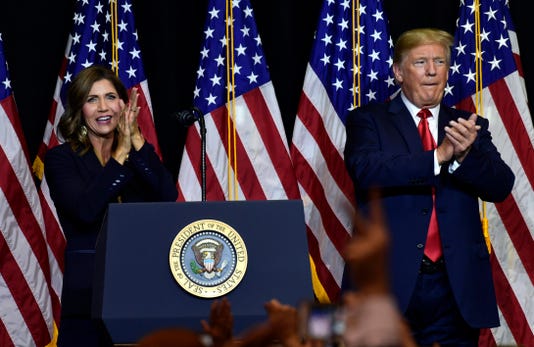 SIOUX FALLS, S.D. – President Donald Trump visited Sioux Falls Friday to fundraise for the state’s Republican candidate for governor, but his speech also provided an opportunity for the president to air his grievances after a defensive week.

The president also renewed a call for new libel laws, this time asking the state’s two senators directly if they’d draft some.

“Hey Mike and John, could you do me a favor?” Trump said. “Create some libel laws that when people say stuff bad about you, you could sue them.” Sens. Mike Rounds and John Thune are both Republicans who represent the state.

It was not the first time Trump has called for Congress to pass stricter libel laws – something that has historically been governed by state law.

“I think it’s a disgrace that somebody can do that and I think it’s more disgraceful that The New York Times would do it, but that somebody is allowed to do that, it’s a very sad commentary,” he said earlier Friday.

The president has been defensive of his administration in response to an anonymous op-ed published in The New York Times and stories about an upcoming book from journalist Bob Woodward about his administration, including a part that describes staffers swiping documents from his desk.

“I would fire a person so fast if he ever touches my desk,” Trump said. “That’s the Resolute Desk.”

An estimated crowd of 500 to 600 people greeted Trump when he arrived at the convention center, cheering and waving signs in support. Trump thanked them and touted the success of the U.S. economy since he took office.

“I was just shaking hands with some people from your area right now, and so many are saying thank you for saving America,” Trump said.

He also exchanged blows with former President Barack Obama, who also spoke Friday at the University of Illinois at Urbana-Champaign and was critical of Trump.

“They said, ‘What did you think of his speech?'” Trump said. “I said, ‘Well I did start watching it, but sadly, I fell asleep.'”

Shortly after Air Force One touched down on the tarmac at Joe Foss Field, Trump greeted a cheering crowd. He stopped to shake hands with a line of South Dakota’s government officials, speaking briefly with Gov. Dennis Daugaard, Thune, Rounds and Dusty Johnson, a candidate for U.S. House of Representatives.

He made his way to a crowd gathered behind a barricade and shook hands and waved to supporters.

During the motorcade route between the South Dakota Air National Guard building and the convention center, people hoisted signs protesting Trump’s tariff policies that have impacted trade with China, Canada, Mexico and other major economic partners.

Noem’s campaign declined to say how much money the candidate raised from the event, but Noem said in an emailed statement she was overwhelmed by the state’s support for the president.

“I’m a big believer that when you visit a state, your relationship with that state changes,” Noem said. “It’s more personal and that can’t be underestimated.”

It was the first visit to Sioux Falls by a sitting U.S. president since April 24, 2002, when Sen. George W. Bush attended a fundraiser for then Congressman John Thune and spoke to a crowd of 7,000 at the Sioux Falls Arena.