Raleigh, N.C. — Florence has been classified as a Category 4 hurricane by the National Hurricane Center and residents, businesses and schools are making preparations for the monster storm.

As forecasters expected, the storm has increased in strength and speed from earlier updates on Monday. According to WRAL meteorologist Elizabeth Gardner, the warm waters closer to the coast help storms like this strengthen.

“We expect Florence to, at the most, have winds top out at 150 mph,” said Gardner. “That’s not far from being a Category 5 hurricane, which has winds of 157 mph or higher.”

If Florence continues on its projected path, it will make landfall along the coast late Thursday. The Triangle shouldn’t see major effects of Florence, like strong winds and rains, until overnight Thursday, but it is still too early to know the storm’s timeline for sure.

“The closer we get to Thursday and Friday, the better idea we’ll have,” said Gardner.

As the storm gets closer to the center of the state, it should weaken to Category 1, but the effects could still be devastating for the Triangle.

Rain and strong winds are the biggest threats from Florence, Garner said. Power outages, downed trees and a risk for flooding are all potential issues in the Triangle.

Florence’s strength this close to the coast is concerning. In the 1950s, Hurricane Hazel made history as the only Category 4 storm to make landfall in North Carolina, and there’s a chance Florence could follow its example.

“We haven’t seen anything like that approaching the coast, assuming this is close to being correct, since Hazel,” WRAL Chief Meteorologist Greg Fishel said. “This is certainly going to make a stronger approach, in terms of wind speeds the way it looks now, than Fran did.”

Most forecast models show Wilmington and North Carolina right in the middle of the storm’s path, but Gardner said we shouldn’t take the red line in the center of the path too seriously.

“The storm could hit anywhere in the cone of uncertainty, as far north as the Outer Banks and as far south as Charleston, South Carolina,” she said. “The storm is almost double the size of the state of North Carolina.”

“If it moves quickly, it brings stronger winds,” said Gardner. “Neither is good.”

Tropical storm force winds (above 39 mph) could begin in North Carolina by Thursday evening if the storms continues on its current path. Up to a foot of rain is likely for central North Carolina from Florence, and Gardner said some areas in the hurricane’s cone could see up to 20 inches at worst. 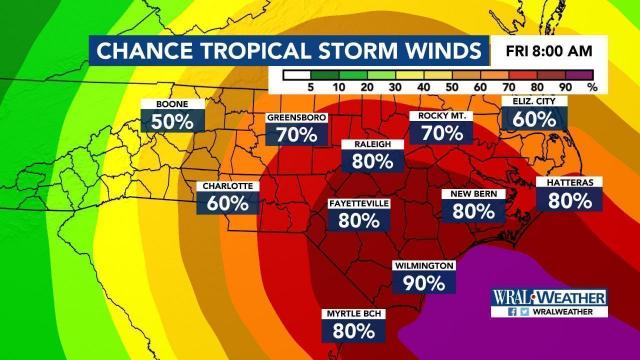 While late week flooding is a major concern for central North Carolina, eastern portions of the state could see devastating impacts early next week as small rivers begin to flood.

In the Triangle, Gardner cautions that we could see trees through homes, flooded roads and countless power outages.

Cooper: ‘We want residents to be ready’

Dare County issued a mandatory evacuation for visitors and residents Monday ahead of the storm.

On Friday, Gov. Roy Cooper declared a state of emergency, making it possible to waive the state’s transportation rules so North Carolina farmers can harvest and transport their crops to market faster.

Cooper said that many North Carolina farmers lost a significant number of crops when Hurricane Matthew hit in 2016, so the state of emergency gave them time to prepare before the storm arrives.

“We did it a little earlier than we normally would have because so many crops were in the field,” Cooper said Sunday in exclusive interview with WRAL News.

On Monday, he asked President Donald Trump to issue a disaster declaration for the state, which he said would allow relief supplies to flow into the state as soon as possible after the storm passes.

The state of emergency also put North Carolina’s price-gouging law into effect. Attorney General Josh Stein asked businesses and residents to be on the lookout for anyone charging excessive prices for needed goods before, during and after the storm.

As many in North Carolina still struggle to recover from Hurricane Matthew, Cooper said lessons learned during that storm are helping officials be better prepared when Florence arrives later this week.

“We learned about flood modeling and we were able to compare different flood scenarios with the different paths [the storm] might take, so we can predict where flooding might occur and we can deploy our resources,” he said.

Cooper said the decision to put evacuation orders in place will be left up to local officials, who best know their communities and residents, but predicted that evacuation orders will likely be issued along the coast in the coming days.

“I would imagine if this storm continues its intensity and its track, we’re going to have evacuations on the North Carolina coast,” Cooper said.

Cooper said officials will hold a briefing on storm preparations at 11 a.m. Monday, but urged residents on Sunday to familiarize themselves with evacuation routes and have a plan for pets if the storm hits.

“We want to hope and pray for the best, but we have to prepare for the worst,” he said. “We’re ready here in North Carolina, our emergency responders are on the ready and we want residents to be ready as well.”

Florence is already causing rough surf and rip currents along the North Carolina coast, and parts of the Carolina coast could begin feeling significant impacts from the storm as early as Wednesday night. Residents in North Carolina and other East Coast states should pay attention to the storm and begin to think about hurricane plans.

UNCW issued a voluntary evacuation for students effective Monday. University officials said that students are encouraged, but not required, to leave campus and all classes will be canceled.

Twelve water rescues were made Saturday and another 15 were necessary at Wrightsville Beach on Sunday as a result of rip currents caused by Florence.

Sunday evening, red flags were up to warn people to stay out of the water, but many surfers were still seen trying to catch a wave.

The biggest threats include flooding and damaging winds.

Residents stock up before the storm

As Hurricane Florence gets closer to North Carolina, Raleigh residents spent their Sunday afternoon stocking up on supplies.

Store owners said the two biggest sellers have been gas and bottled water, with shelves bare in many stores across the Triangle.

“Just in case I might have to make a quick getaway, I have a full tank of gas and I’m ready,” Raleigh resident Tony Johnson said.

Johnson is not taking any chances with Hurricane Florence and was one of many getting gas and groceries on Sunday.

“I got a lot of canned vegetables, some that you don’t have to cook on the stove, and I got a lot of water and a lot of bread,” Johnson said. “I got candles, I got flashlights, I got tons of gallons of water. Yeah, I’m ready.”

Though weakened to a tropical storm, Florence was expected to regain hurricane strength as it neared Bermuda. Large swells were already expected to hit the British island territory in the north Atlantic Ocean Saturday.