Unexpected moments (that proposal!) and winners (“The Americans”!) made a night without Trump memorable, but the hosts didn’t boost an uninspired production.

In the new season of “BoJack Horseman,” a series the Emmys have criminally overlooked for four years, the titular talking horse is talking about his TV series and says, “No show should have that much talking! TV is a visual medium!” The joke actually ties into another episode where BoJack has a 26-minute monologue, but it’s just as good if you only look at what’s right in front of you: the many, many colors, characters, gags, notes, hidden puns, and more filling every inch of the Netflix comedy’s frame, at all times, every episode.

That’s because television may be on a small screen, but it’s no longer made for the small screen. The time of black-and-white, 4:3, and tube TV is over. Live musicals are helping keep broadcast afloat, at the Emmys and beyond. Daring directors like David Lynch, Cary Fukunaga, and Lesli Linka Glatter are bringing stories to life without limits. Stories are being told about all walks of life from a diverse body of incredible artists.

The long and short of it is that visuals matter, too — not that you’d know it from the 2018 Emmys ceremony on NBC. Produced by Lorne Michaels and hosted by his Weekend Update correspondents and head writers Colin Jost and Michael Che, the Emmys telecast was as paralyzed as the hosts’ matching interlocked grips. Only the winners, an occasional bit from guests, and one unprecedented proposal livened things up, but overall it was a long, languid ceremony to watch — and the monologues weren’t much better.

Problems began with the pre-monologue song-and-dance. Well-intentioned and with a few choice lyrics (mostly given to Titus Burgess, like “We know exactly where we stand — with Roseanne!”), the quiet music and simple choreography may have worked if there had been anything going on visually. The One of Each Dancers added brief flourish, but it was very brief. John Legend did the same. But those big gray screens behind the likable cast of actors was glaringly dormant or offering a negligible impact. (Later, they were used to show the characters played by each winner, hovering over speeches like a giant reminder of who the person on stage is better known for.)

Then came the monologue. With jokes that started with cliches like “Things were very different then…” and ended with punchlines about Nazis, most of Che and Jost’s material just felt soft. What wasn’t soft was oddly pointed: The duo mocked NBC for having the most nominations of any broadcast network (calling it the equivalent of being the “sexiest person on life support”). Their seemingly endless Netflix rant never really connected, and what was that Obama joke? “My dream is that they only produce their own versions of ‘The Apprentice’… and it gets way higher ratings.” The way Jost paused made the audience think the punchline had already come, and then his kicker turned out to be an awkward joke about President Trump’s pride in TV ratings?

Perhaps what was most admirable about the telecast was how little Trump came up. Other than Samantha Bee’s allusion to POTUS when quipping that TV news needs a “new lead,” the Cheeto in Chief was pretty much absent from the night’s proceedings. That’s rare for awards shows, and it honestly felt pretty good. Later in the episode, Che’s “Reparations Emmys” was a solid pre-recorded piece that played well as an earnest recognition of overlooked black actors. The jokes were fine, but they went along with the best you could say about the hosts overall: They were negligible to the show overall. 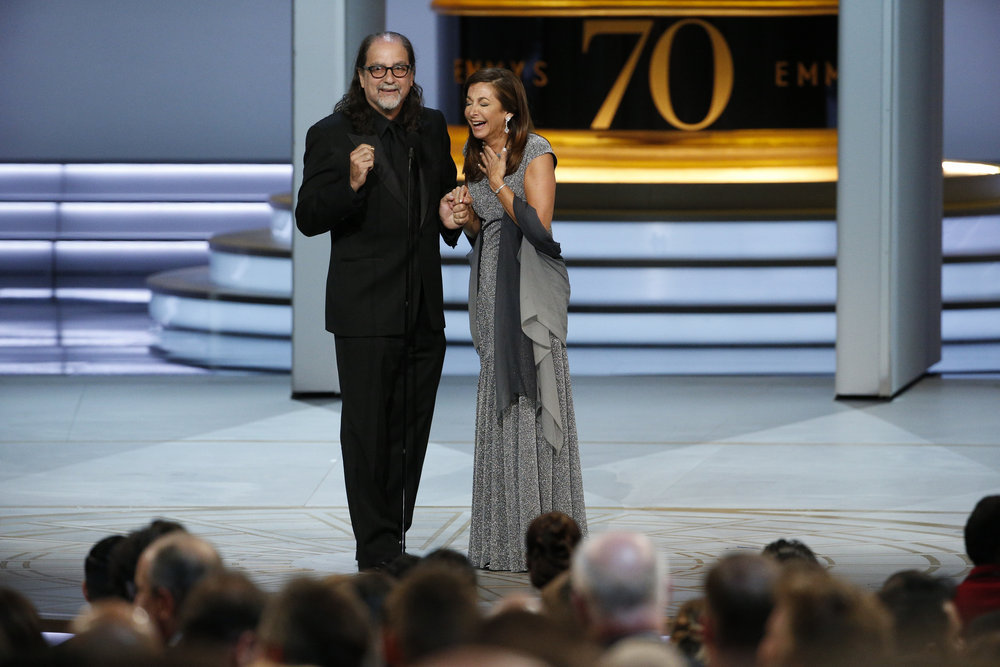 Glenn Weiss, post-proposal at the 2018 Emmys

What worked was what always works at awards shows: the surprises. Henry Winkler immediately reminded viewers what excitement looks like. (Che failed to do this throughout, while Jost at least offered pretend laughs at his co-host’s jokes.) Then Alex Borstein tossed her shawl on the ground as she walked to the stage, and Amy Sherman-Palladino won back-to-back awards for writing and directing. Sandra Oh somehow made a “La La Land” joke kill at an award show, and Jeff Daniels thanked his horse. Hannah Gadsby became everyone’s pick for “this presenter should be promoted to host,” and with good reason; Gadsby found a fun tone in mere seconds while Che and Jost kept searching all night.

Then it happened: Glenn Weiss won an Emmy and deftly shifted his victory speech into a moving proposal. Honestly, if someone would’ve told me this was coming, I would’ve bet that it would bomb heavier than I did on “Twin Peaks” getting shut out (sadly), but the Oscars director knew exactly what he was doing and stole the show. While almost all credit should go to Weiss, who managed to be just the right balance between crazy nervous and perfectly poised, the reactions of everyone in the audience — and Sterling K. Brown on stage — sent the moment to iconic status. It’s the best speech of the night, and some of the best moments were silent save for gasps and applause. Anyone watching will never forget it, and that’s what these shows are all about (you know, at least for the viewers at home).

The rest of the show took advantage of memorable visuals paired with clever words — like Matthew Rhys’ solid speech for his semi-surprise “Americans” win (that accent is always winning, for what it’s worth) — but it coasted on the momentum of its winners. Pretty people in beautiful gowns and sharp tuxes go a long way, as do big wins for nominees who didn’t see it coming. But for a three-hour-plus live show to keep fans riveted all by itself, without the aid of checking Twitter or flipping over to the Cubs’ game during commercials, every corner of your TV needs to be bursting with delights. It needs to do what the best of the medium always does: make the small screen feel big. The 2018 Emmys didn’t do much to enhance its inherent charms. Maybe next year they should hire the “BoJack” team to produce — or, you know, at least toss it a nomination.

Sign Up: Stay on top of the latest breaking film and TV news! Sign up for our Email Newsletters here.