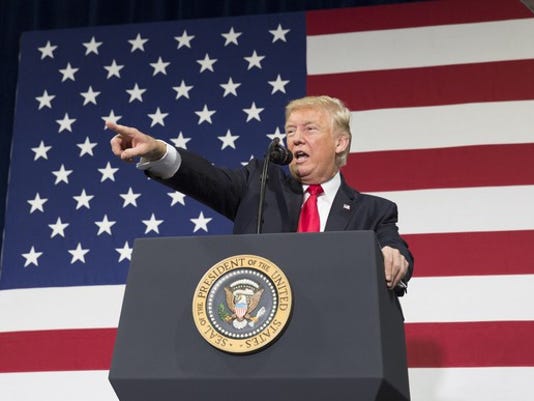 WASHINGTON – When President Donald Trump takes the gavel at a United Nations Security Council meeting next week, he will try to pressure other world leaders to crack down on Iran and other countries that violate U.N. decrees against nuclear proliferation.

Trump will tell the Security Council that it must find new ways to punish countries that flout its resolutions limiting weapons of mass destruction, according to a draft memo outlining the White House’s plan for that high-stakes session.

“The Security Council has regularly adopted resolutions to counter WMD threats,” the Sept. 18 draft plan states. But those resolutions “are often flouted without penalty,” undermining peace and security across the globe, the draft argues.

Trump will chair the Security Council session Sept. 26, his first time serving in that role. It comes as Trump has alienated traditional allies of America and pulled the U.S. out of numerous multilateral agreements.

The White House “concept note” does not mention Iran specifically. But earlier this month, Nikki Haley, U.S. ambassador to the United Nations, suggested the president would focus solely on Iran when he chaired the Security Council session.

Trump will use the meeting to highlight Iran’s “violations of international law” and the “general instability” that Iran sows across the Middle East, Haley said at a forum in early September.

The Washington Post reported this week that the White House had backed away from that Iran-focused plan, in part, because Iranian officials would have been given an opportunity to respond.

Now, the White House document outlines a broader focus and no plan to name specific countries. That will block Iranian government leaders from speaking.

The memo notes that “only Security Council members are invited to speak at this meeting due to time constraints and the general nature of the topic.” Iran is not a member of the 15-country council.

“The Security Council must identify ways to ensure its resolutions on WMD threats are respected,” the document says. “States that violate these resolutions must be held accountable. In addition, all breaches of non-proliferation treaties and agreements must be treated seriously with consequences.”

Trump will call on other members of the Security Council to use sanctions, political pressure, and other tools to crack down on violations.

Even if Trump refrains from calling Iran out, his address appears to be aimed mainly at Tehran and its leaders.

“They are trying to frame the issue as broader than Iran, hoping they can get support. But at the end of the day, this is about them trying to add pressure on Tehran,” said Brett Bruen, who served as director of global engagement in the Obama administration.

He said Trump’s strategy was unlikely to produce the intended results.

“Trump is walking into a deeply skeptical Security Council that feels scorned by his unapologetically unilateral approach to diplomacy,” Bruen said. Other members of the council “are in no mood to go along with a thinly veiled attempt to lend legitimacy to Washington’s campaign to pressure Tehran.  Bullying and bulldozing does not beget buy in.”