Donald Trump and the senators at the Brett Kavanaugh-Christine Blasey Ford hearing are latest signs that we should consider maximum age requirements. 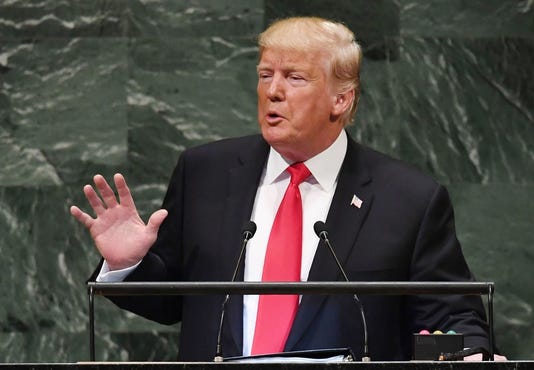 In the winter of 1794, President George Washington was one year into his second term — and he was feeling his age. Twenty years in the country’s service had transformed the once virile figure most Americans remembered admiringly from the Revolution into a slow-moving, slow-talking, dried-up old man. A friend, recounting a recent visit with the president, described to a colleague how frail Washington had grown, his face “cadaverous” and his voice “thin and whispery.” Washington had wanted to step down the year before, but the fledgling American republic might not have survived his departure. So, he soldiered on, years after he should have retired from public life.

Most voters understand from personal experience that physical and cognitive abilities diminish precipitously with advancing age and yet, in election after election, voters give aging political candidates the benefit of the doubt and elect them anyway.

Anyone doubting this need only recall that senators Charles Grassley, Orrin Hatch and Patrick Leahy, Judiciary Committee members who were at both the Brett Kavanaugh-Christine Blasey Ford hearing Thursday and the Clarence Thomas-Anita Hill hearing in 1991, are 85, 84 and 78 years old, respectively. President Donald Trump, 72,  most recently raised doubts Wednesday at a rambling, 81-minute news conference variously described in headlines as astonishing, outrageous, strange and wild.

A maximum age requirement would help

How old is too old to run for office? We have all seen thetime-lapse photos of presidents that show the aging effects of the job on their physical features. Sometimes the signs are less obvious. President Ronald Reagan, for example, was 73 when he ran for re-election in 1984 despite showing signs of creeping cognitive decline.  According to hisformer communications director Tom Griscom, at the beginning of the second term, incoming White House chief of staff Howard Baker was so concernedabout Reagan’s mental acuity that he ordered an evaluation of the president to determine whether Reagan was fully capable of governing.

In some ways, the life of a CEO resembles that of a president. Both have punishing schedules and enormous 24-7 responsibilities. Both types of leaders are blamed for the mistakes of subordinates when things go wrong and get all the credit when things go right. They are each answerable to their own particular version of a constituent.

But take a moment and search your memory for the last time you read about a CEO of a Fortune 500 company over the age of 70.  Actually, don’t bother. There aren’t many. In the corporate world, advancing age is often viewed as a disqualifying factor when considering a candidate’s elevation to CEO.

More: Chaos in Trump’s White House is good news for our global adversaries

According to a 2017 report by MarketWatch, “Nearly three-quarters of S&P 500 firms and roughly half of S&P 1500 companies have bylaws that require CEOs to retire at a certain age — typically 65.” Warren Buffett is still showing up for work every day in his late 80s, but he is the exception, not the rule. In fact, according to a recent Bloomberg study, as the average age of S&P CEOs has inched up past the mid-50s, nervous investors are demanding to know more and more about CEO health.

In politics, there are many minimum age requirements for candidates — but maximum age does not exist. In California for instance, 85-year-old Sen. Dianne Feinstein is running for re-election. She would be 91 at the end of her next term. Meanwhile, in Florida, former Health and Human Services secretary Donna Shalala is running for an open House seat at age 77. If she wins, she will be welcomed in Washington by Democratic House leaders Nancy Pelosi, 78; Steny Hoyer, 79; and Jim Clyburn, 78.

If the make-up of political Washington is any indication, voters give little thought to age — that is, until it becomes a problem. Consider the many accounts of Trump’s deficiencies in office. Criticisms of his mercuriality, poor memory, weak powers of concentration and unreliable energy have been cited as reasons a secret society of unelected, unvetted advisers has emerged to run the government behind his back.

The stories in Bob Woodward’s new book about Trump’s age-related challenges remind me of the last time I saw the late Sen. Strom Thurmond alive. I was a young congressional staffer, new to Capitol Hill on my way to a meeting in Union Station, a few blocks from the Capitol. As I crossed Constitution Avenue and walked toward the Russell Senate Office Building, I recognized the almost 100-year-old Thurmond struggling to rise, with the help of his driver, from the seat of his car.

In the time it took me to walk the distance from one corner to the next, the senator still had not yet fully risen to his feet. I was a new staffer, but I knew enough about Congress even then to understand the physical demands of the place. I caught myself wondering how someone as brittle as Thurmond could possibly shoulder all the burdens associated with his job. The Iraq and Afghan Wars had just begun and he sat on both the Armed Services and Judiciary committees.

But then I remembered, the senator had a staff of advisers to help with that. Perhaps his driver was one of them.

K. Ward Cummings is a former senior congressional adviser and the author of “Partner to Power: The Secret World of Presidents and their Most Trusted Advisers.” Follow him on Twitter: @kwardcummings