‘We fell in love’ over ‘beautiful letters’ 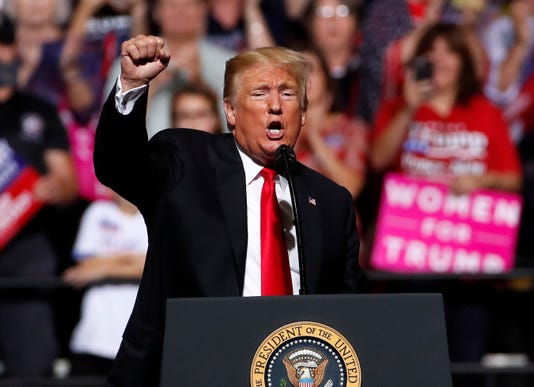 President Donald Trump said he and North Korean leader Kim Jong Un “fell in love” because of Kim’s “beautiful letters,” but another top Pyongyang official warned that denuclearization of the Korean Peninsula won’t happen unless the U.S. backs up its warm words with action.

Trump, speaking at a rally in West Virginia on Saturday night, said both leaders took tough positions at their June summit.

“I was really tough and so was he, and we went back and forth,” Trump told an adoring crowd of thousands at Wesbanco Arena in Wheeling. “And then we fell in love, OK? No, really, he wrote me beautiful letters, and they’re great letters. We fell in love.”

North Korea’s foreign minister, however, suggested the bloom may be off the rose. Ri Yong-ho, speaking to the U.N. General Assembly in New York on Saturday, said his country won’t dismantle its nuclear weapons program seeing “trust-building” measures from the U.S.

“Without any trust in the U.S., there will be no confidence in our national security, and under such circumstances, there is no way we will unilaterally disarm ourselves first,” Ri said.

More: Secretary of State Mike Pompeo to travel to North Korea next month

More: Why Trump needs to be involved in North and South Korea talks

Kim has committed to denuclearization in return for security guarantees from the U.S. Ri said it is time for the U.S. to curb the crippling economic sanctions his nation has faced and to make other gestures aimed at pushing the relationship between the two nations forward.

Ri met with U.S. Secretary of State Mike Pompeo last week and invited him to make a fourth visit to Pyongyang. An August visit was canceled after Trump determined that insufficient progress was being made.

“The reason behind the recent deadlock is because the U.S. relies on coercive methods, which are lethal to trust-building,” Ri said.

Trump acknowledged that the U.S. has made no concessions.