At the same time, granting India a sanctions waiver for a more-than $5 billion deal involving one of Russia’s most advanced weapons systems risks undermining Washington’s escalating campaign against Moscow. The Treasury and State Departments last month sanctioned China’s Equipment Development Department for its recent purchases of Sukhoi Su-25 jet fighters and S-400 missiles from Russia. Officials said the move was intended to send a message to other countries considering similar Russian arms deals.

An S-400 missile being launched at a shooting range south of Moscow.

India has declined to back out of the deal with the Kremlin, with a signing ceremony expected during Mr. Putin’s trip. Russia has long been the biggest source of New Delhi’s military equipment, and its supply of spare parts and maintenance services remains crucial to India’s defense needs. Indian military planners see the S-400 surface-to-air missile system—capable of tracking and taking down aircraft hundreds of miles away—as an important asset against neighbors Pakistan and China.

The deal also reflects India’s effort to repair relations with Russia. Those ties have frayed in recent years as India diversified its arms purchases, turning to the U.S. for equipment, including maritime patrol aircraft and attack helicopters. According to the Stockholm International Peace Research Institute, 62% of India’s arms imports from 2013 to 2017 came from Russia, down from 79% in the five preceding years.

The Indian market remains crucial to Russia’s arms industry, which was the world’s second-largest exporter last year. Russia exported $2 billion worth of arms to India last year, some 13% of its total deliveries world-wide, according to Russian defense think tank CAST.

Officials in New Delhi expect the U.S. will understand that India can’t cut Russia out or allow ties to drift, said Harsh V. Pant, head of strategic studies at the New Delhi-based Observer Research Foundation, adding that imposing sanctions would be “highly disruptive.”

“It would revive old debates and suspicions in India about the U.S.’s agenda,” Mr. Pant said. “Few governments in India would be able to do anything substantial with the U.S. for some time.”

Washington is pushing for new security arrangements in Asia that hinge on bringing India, Japan and Australia together in response to China’s increasingly assertive stance in the region. India and the U.S. have signed two defense pacts in as many years that allow the use of each other’s military bases for repairs and replenishment of supplies and give India access to cutting-edge American military communications technology.

India’s purchases of U.S. military equipment during the 2013-17 period rose by more than 500% from the previous five years, according to the Stockholm International Peace Research Institute.

Richard M. Rossow, an expert in U.S.-India policy at the Center for Strategic and International Studies in Washington, said the U.S. would likely give India a waiver because of longer-term security objectives.

“It’s too important not to, though it would be painful,” he said. 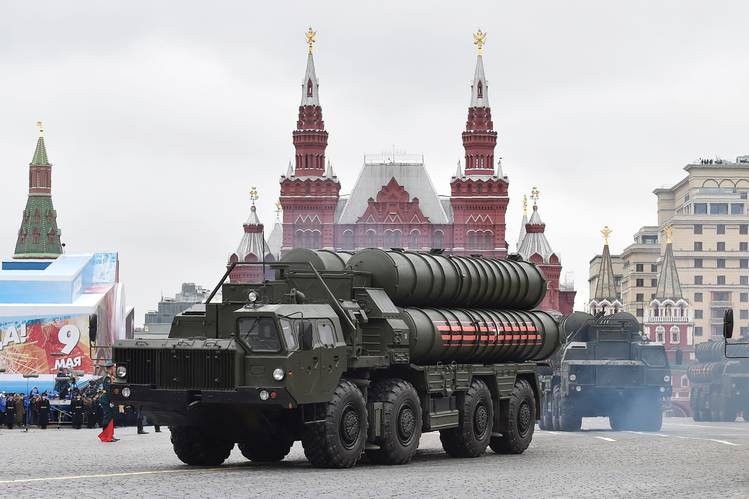 The deal would complicate some possible future U.S. military sales to India over concerns that U.S. technology could be used in close coordination with the Russian systems, Mr. Rossow said. The U.S. has tried, so far without success, to persuade NATO ally Turkey to abandon a deal to procure the S-400 system.

In a recent analysis on the planned Russia-India deal, Ashley Tellis, a senior fellow at the Carnegie Endowment for International Peace, said the Trump administration sees purchases of the S-400 by either rivals and allies as “a conspicuous danger to U.S. military operations,” largely because the systems help to constrain the deployment of forces and their freedom to maneuver.

So far, U.S. officials have given mixed signals on New Delhi’s planned acquisition. Defense Secretary Jim Mattis in April cited the U.S.’s relations with India and Vietnam when he asked Congress to give the U.S. government the power to waive Russia-related sanctions, which Congress granted.

In August, Assistant Defense Secretary for Asia Randall Schriver, said the impression that “we are going to completely protect the India relationship, insulate India from any fallout from this legislation no matter what they do” was “a bit misleading.” A few days later, Secretary of State Mike Pompeo said that the U.S. effort was “not to penalize great strategic partners like India.”

—Bill Spindle in Washington, Thomas Grove in Moscow and Rajesh Roy in New Delhi contributed to this article.

Write to Niharika Mandhana at niharika.mandhana@wsj.com