Former Trump campaign chair Paul Manafort pleaded guilty Friday to two federal crimes as part of a plea deal in which he agreed to cooperate with the special counsel’s Russia probe. AP Justice reporter Eric Tucker explains what it all means. (Sept. 14)
AP 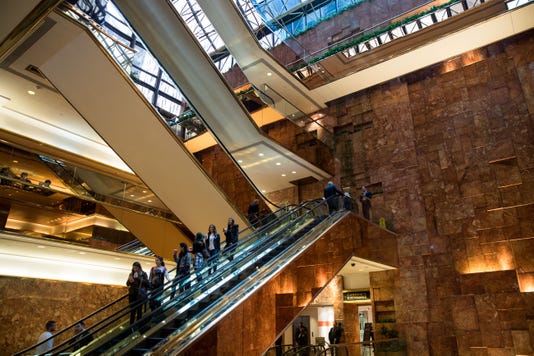 WASHINGTON – Paul Manafort, the former chairman of President Donald Trump’s campaign, agreed Friday to forfeit his condo in Trump Tower in New York City and a retreat in the Hamptons as part of his guilty pleas in special counsel Robert Mueller’s investigation into Russian interference in the 2016 election

The forfeitures were anticipated as part of Manafort’s plea agreement but the six-page filing Friday in U.S. District Court in Washington specified the bank accounts and pricey properties that the government will seize as soon as Oct. 20.

The forfeited properties include Trump Tower apartment 43G at 721 Fifth Ave., which is valued at $3 million, and the Hamptons house at 174 Jobs Lane in Water Mill, New York, which is valued at $7.3 million, according to the real estate site Zillow.com. Other forfeited properties are at 377 Union St. in Brooklyn; and 29 Howard St., Apt. 4D, and 123 Baxter St. in Manhattan.

The accounts that were forfeited include two at The Federal Savings Bank, one at Capital One and a Northwestern Mutual Universal Life Insurance policy.

If Judge Amy Jackson agrees with the order, the Justice Department will take over a unit not far below Trump’s own in one of the signature buildings of his real estate empire and the place where he launched his presidential campaign. Manafort agreed with the request.

The forfeitures resulted because the property and accounts “were derived from proceeds traceable to” the crimes he acknowledged, according to the filing from prosecutor Andrew Weissmann.

Manafort pleaded guilty last month to conspiring against the U.S. by working for a pro-Kremlin political faction in Ukraine and conspiring to obstruct justice by trying to persuade two people who helped with that work to offer inaccurate accounts to investigators.

The 24-page statement of offenses cataloged a decade of criminal conduct on behalf of a former Ukrainian president now living in exile in Russia. Manafort and his partners earned tens of millions of dollars for the work between 2006 and 2015, and stashed large portions in Cyprus bank accounts to shield it from U.S. tax authorities.

The pleas came after he was convicted by a jury in U.S. District Court in Virginia of eight counts of submitting false tax returns, failing to report bank and financial accounts, and bank fraud.

Manafort awaits sentencing in both cases and is cooperating with prosecutors.