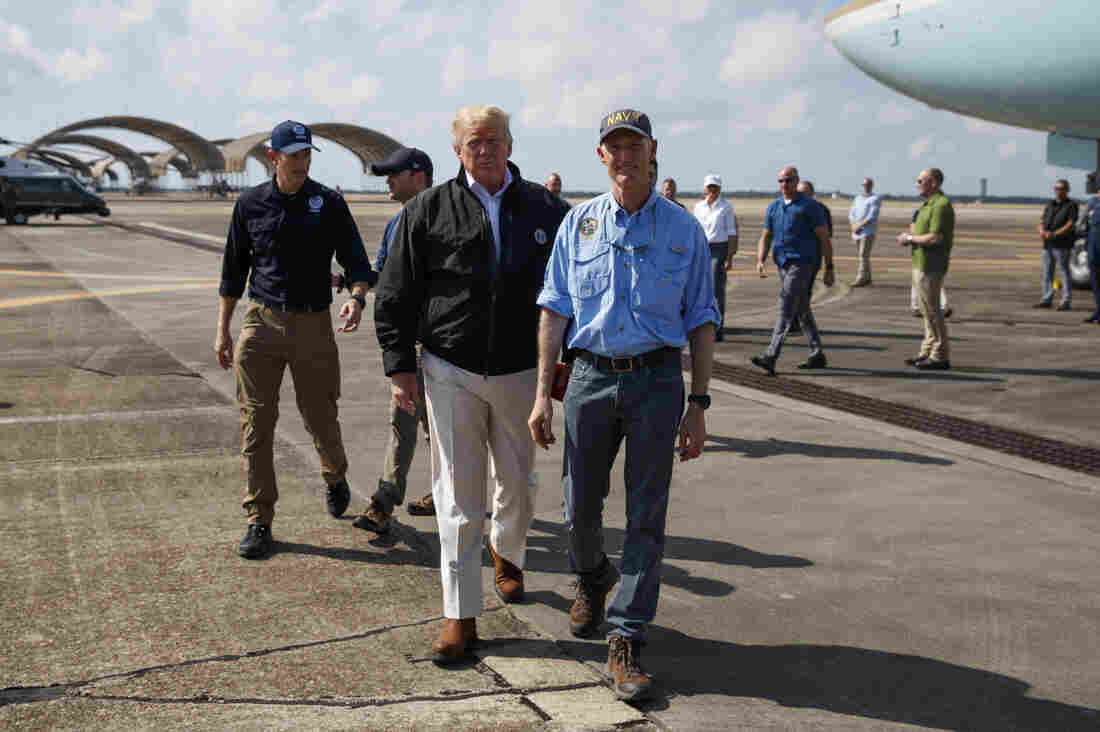 Florida Gov. Rick Scott (right) and President Trump walk over to speak with reporters after arriving on Monday at Eglin Air Force Base in Florida to visit areas affected by Hurricane Michael. 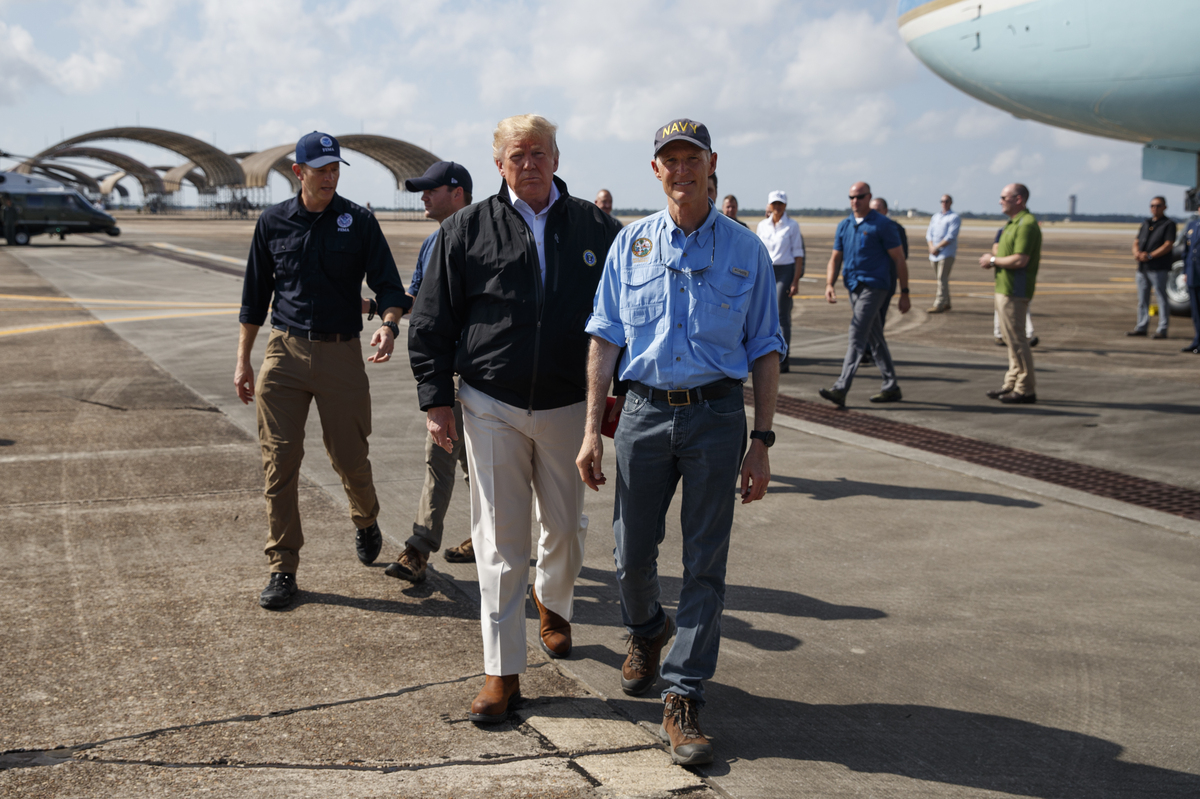 Florida Gov. Rick Scott (right) and President Trump walk over to speak with reporters after arriving on Monday at Eglin Air Force Base in Florida to visit areas affected by Hurricane Michael.

After Hurricane Michael slammed through the Florida panhandle and into Georgia last week, President Trump has surveyed damage and met with officials about recovery efforts.

At a briefing alongside Florida Gov. Rick Scott at Eglin Air Force Base, Trump praised the work of emergency responders and law enforcement.

“The job they’ve done in Florida has been incredible,” he said, and described Scott as a leader who “steps up in the biggest emergencies, the biggest problems, and he gets it done.”

Scott lauded Trump’s response to the devastating storm. “Every time I called, he’s come through and done exactly what he said he was going to do.”

The president observed some of the worst-hit areas during a helicopter tour, including homes that had been completely ripped from their foundations.

“Some of them have no trace of a home,” Trump said. “It just got blown right off the footing.”

The president stated that the government’s immediate priorities are food, water and safety for storm victims.

Will be leaving for Florida and Georgia with the First Lady to tour the hurricane damage and visit with FEMA, First Responders and Law Enforcement. Maximum effort is taking place, everyone is working very hard. Worst hit in 50 years!

During the helicopter tour, severe damage was visible in Florida’s Panama City and Mexico Beach, near where the storm made landfall.

Many trees were ripped out of the ground, and a number of roofs had holes torn in them by the storm’s strong winds. A water tower was visible completely tipped over.

As NPR’s Quil Lawrence reported, many residents of Florida’s hard-hit areas are seeking tarps and chainsaws to clear downed trees and cover holes in their roofs.

“There’s no cellphone signal in much of the region,” Lawrence reported. “Locals have been getting tips from radio stations about where they might find gas, food and water distribution and medical care.” 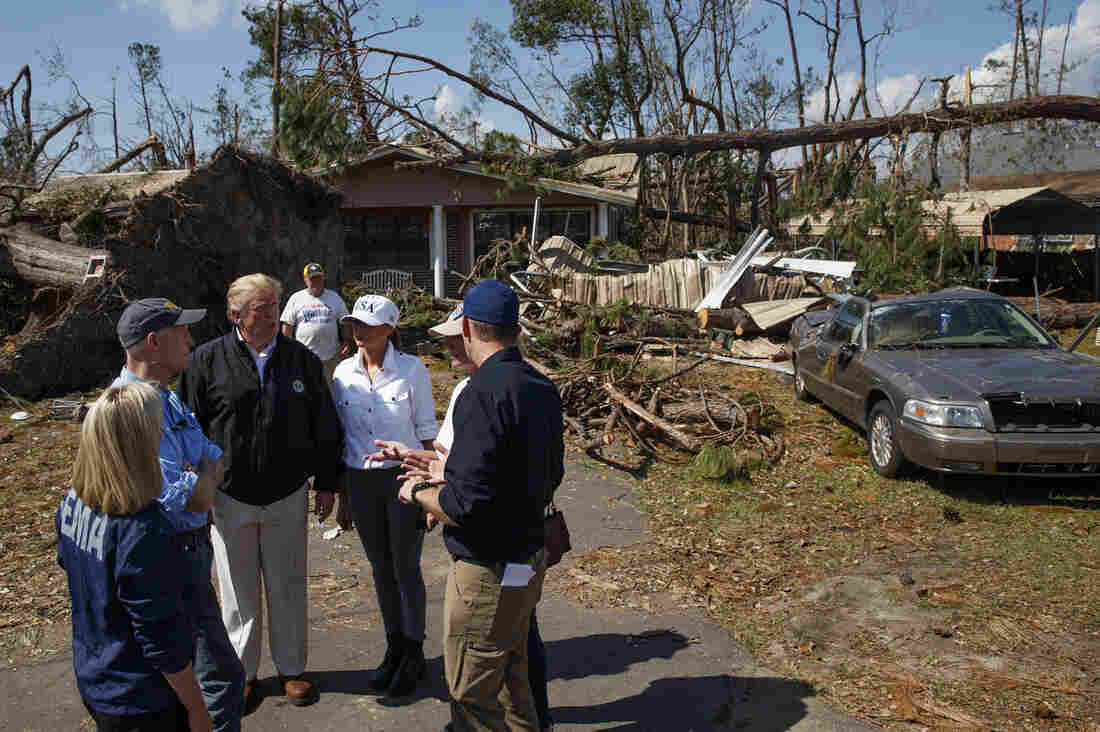 More than 150,000 customers in the state remained without power as of Monday afternoon, according to the Florida Division of Emergency Management.

The president also surveyed a street in the badly damaged community of Lynn Haven, where he spoke to a man named Michael Rollins who rode out the storm at home because he wanted to protect his pets. Rollins added that he’s never seen a storm like this one.

Trump visited a FEMA aid distribution center in Lynn Haven, and stated that those involved in the recovery efforts are “doing more than anybody would have ever done.”

The president also traveling to Georgia, where he participated in a briefing in Macon with federal and state officials.

There, FEMA administrator Brock Long said that the area is going to see major agricultural losses.