EL PASO – Lyda Ness-Garcia listened with stunned dismay last week as President Donald Trump said her hometown was “once considered one of our nation’s most dangerous cities,” then announced a campaign rally here to draw support for his border wall and re-election next year.

On Monday, she and other activists will lead protestors in a counter rally to the president’s gathering that will include former congressman Beto O’Rourke, local leaders, taco trucks and teams of mariachisplaying Bob Marley’s “Get Up, Stand Up.”

Their message: El Paso is safe, vibrant and open for business.

“People are so eager to believe the worst of us in border towns,” said Ness-Garcia, a family law attorney and founder of Women’s March El Paso. “We are proud El Pasoans. We will show America and the world who we really are.”

Once again, a border community along the Texas-Mexico border finds itself at the center of a divisive national debate over immigration and border security – and defending itself from perceptions of rampant criminality. 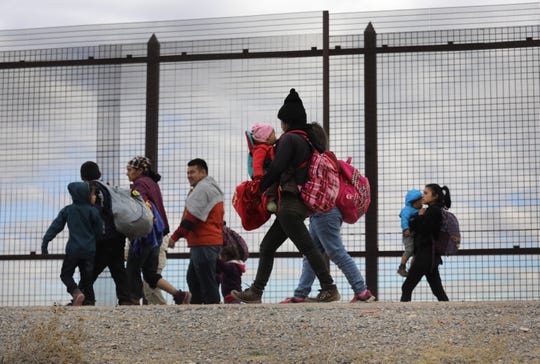 Last month, Trump traveled to McAllen, 800 miles southeast on the Texas border, to meet with officials from U.S. Customs and Border Protection amidst a government shutdown that centered on his demands for $5.7 billion to build a border wall. McAllen residents were quick to remind the world they live in a safe community with a relatively low violent crime rate, prompting one theater owner to display on his theater’s marquee: “WELCOME TO MCALLEN, 7TH SAFEST CITY IN AMERICA.”

On Monday, the president will speak in front of several thousand supporters at the El Paso County Coliseum, located a short stroll from the U.S.-Mexico border. As in his McAllen’s visit, Trump’s trip to El Paso will be rife with political undertones: It’s a campaign event in a strongly Democratic county, the hometown of O’Rourke – considered a potential challenger to Trump in 2020 – and just four days before another partial government shutdown could begin.

A bipartisan group of lawmakers were negotiating ahead of Friday’s deadline, but on Sunday, those talks appeared to stall , setting up another face-off over funding.

Many here seethed at Trump’s characterization of El Paso during his State of the Union address last week, when he said the border city had “extremely high rates of violent crime” until a border fence was installed. The peak of violent crime in El Paso – at about 6,500 violent crimes per year – was recorded in 1993, well before the fence was erected in 2008, and has fallen steadily since, according to an analysis by the El Paso Times.

But even at its violent peak, El Paso recorded lower levels of violent crime than comparably-sized cities, such as the 22,000 violent crimes reported by the Baltimore City Police Department and 16,600 reported by police in Washington, D.C., the same year, according to the Times.

The president’s remarks felt like another dagger aimed at border communities who have lived in harmony with their Mexican neighbors for generations, said state Sen. José Rodriguez, whose district represents El Paso.

Besides the misleading perception that danger lurks in El Paso at the hands of immigrants, such comments erode trust built up over the years between local law enforcement and immigrant communities, said Rodriguez, who spent 20 years as the county’s top prosecutor. 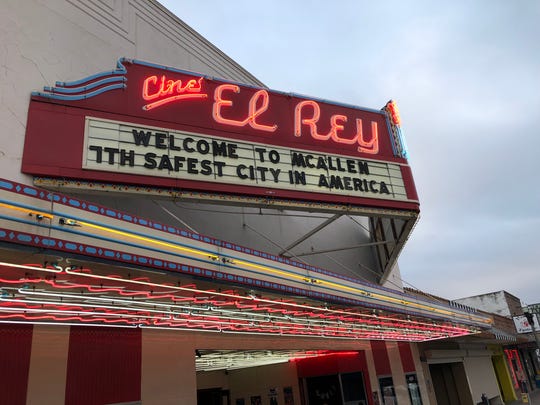 As they braced for his rally in El Paso, people here remember President Donald Trump’s visit to McAllen, Texas, last month. During that visit, the marquee at the Cine El Rey, a 1940s-era theater-turned-music-venue, touted the fact that McAllen is ranked as one of the safest cities in the country. (Photo: Rick Jervis, USA TODAY)

“What I fear is that, with the kinds of statements Trump makes, people will conflate violence with Mexico,” Rodriguez said. “El Paso is a very safe community. It’s just simply outrageous people like President Trump will depict us as living in a dangerous area.”

Falling crime stats aside, El Paso is struggling with a growing immigration crisis. The number of immigrant families apprehended by the Border Patrol’s El Paso Sector has soared in recent years, from 562 in fiscal year 2014 to 8,609 in fiscal year 2017 and 12,312 last fiscal year. Over Christmas, hundreds of immigrants released from federal immigration custody were dropped off at downtown bus shelters, sending churches and activist groups scrambling to assist them.

Adolpho Telles, chairman of El Paso County Republican Party, said he feels the area has become safer since federal authorities erected the border fence in El Paso, limiting the streams of migrants who were crossing into the community.

Shortly after Trump’s State of the Union, Telles received a request from the president’s campaign for 150 volunteers to help at the rally, which he secured within two days, he said.

In McAllen last month, more than 100 Trump supporters lined a busy street near the airport in a well-organized rally to welcome the president. Telles said he doesn’t expect a similar pro-Trump rally to materialize in El Paso, but he hoped both sides of the divisive debate could respect the other on Monday.

“I hope El Paso gives the president an extremely El Paso-friendly welcome,” he said. “I hope the president spends more time talking about unity in the nation and I hope we as a city could show that unity.”

Ness-Garcia, the march organizer, said she and others are dismayed that El Paso has been the site for controversial federal immigration practices. The Trump administration launched a pilot program here for family separations before expanding the program, she said. The policy drew fierce criticism and was ultimately dropped, though it remains unclear how many children were separated from the families and are still being separated.

And the Tornillo faciltiy, a tent city housing migrant youth that also later closed under withering criticism, was operated nearby.

“El Paso, unfortunately, has been the testing grounds for some of the most inhumane policies of this administration,” Ness-Garcia said. “Yes, there’s a lot of anger, but there’s allo a lot of positivity. That’s what we want to focus on: being peaceful and passionate.”

Perception is important in a place like El Paso, the nation’s 10th largest exporter and whose retail stores rely heavily on shoppers crossing over from Mexico.

Movies, like Oscar-nominated “Sicario,” have portrayed El Paso as struggling to rebuff the carnage spilling over from cartel violence across the border in Ciudad Juarez, Mexico.

Trump’s comments added to that perception.

“That’s the image we have to fight every single day, and it’s a false image of our area,” Barela said.

At Lucy’s Coffee Shop near downtown El Paso, diners munched on breakfast burritos and debated which of the two rallies they’d rather attend: Trump’s or O’Rourke’s.

Jessica Kludt, 34, an attorney, said she was definitely going to the latter.

“I’m hoping the Beto rally will be full and the Trump rally is empty,” she said. “That’s my hope.”