Iranian officials are defending the seizure of British-flagged tanker Stena Impero in the Strait of Hormuz near Iran’s coast on Friday. 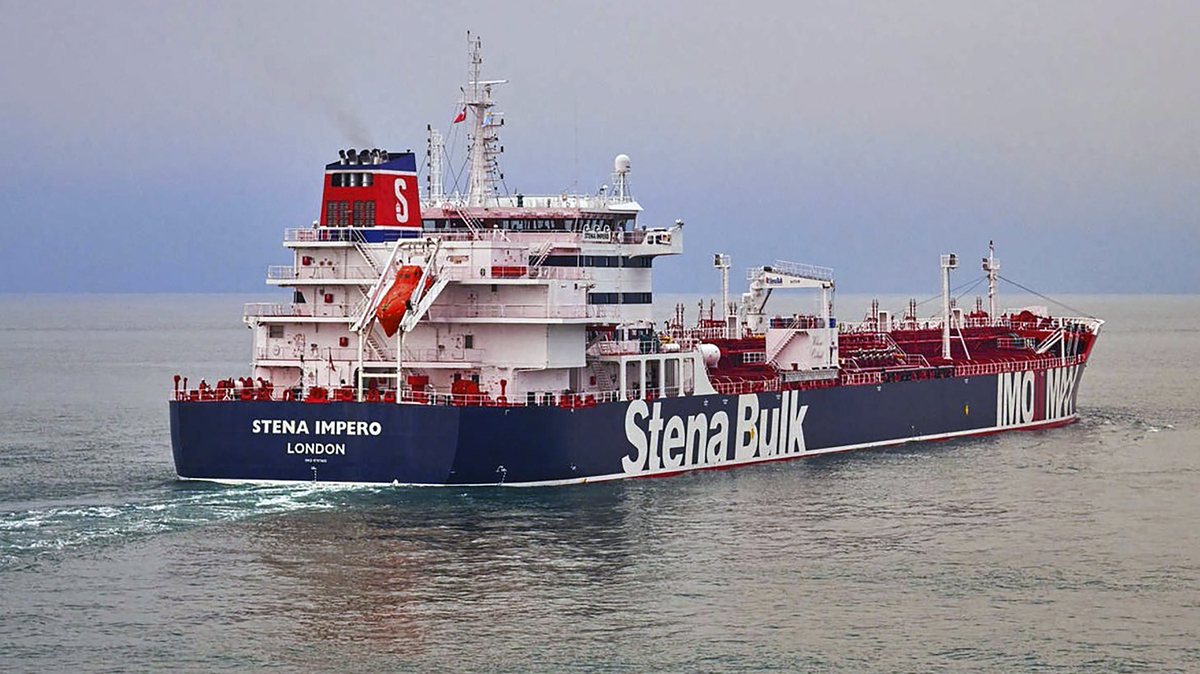 Iranian officials are defending the seizure of British-flagged tanker Stena Impero in the Strait of Hormuz near Iran’s coast on Friday.

The U.K. Foreign Office is summoning the Iranian charge d’affaires following Iran’s seizure of a British-flagged tanker in the Strait of Hormuz on Friday.

The Stena Impero was traveling to a port in Saudi Arabia, when, according to Iran’s Fars News Agency, the ship collided with an Iranian fishing boat. Iran’s Revolutionary Guards took control of the tanker, and Iran says the vessel and its crew will remain in the Iranian port of Bandar Abbas during an investigation of the accident.

The ship had 23 crew members. Stena Bulk, the owner of the seized tanker, says the crew members are of Indian, Filipino, Russian and Latvian nationalities.

NPR’s Lauren Frayer reports that 18 of the crew members detained are Indian citizens. Indian government spokesman Raveesh Kumar said in a statement, “We are ascertaining further details on the incident. Our Mission is in touch with the Government of Iran to secure the early release and repatriation of Indian nationals.”

The tanker’s seizure is prompting alarm from Britain. Britain’s foreign minister, Jeremy Hunt, says the tanker’s seizure “shows worrying signs Iran may be choosing a dangerous path of illegal and destabilising behaviour after Gibraltar’s legal detention of oil bound for Syria.” He said Britain’s reaction will be “considered but robust.”

1/2 Yesterday’s action in Gulf shows worrying signs Iran may be choosing a dangerous path of illegal and destabilising behaviour after Gibraltar’s LEGAL detention of oil bound for Syria.

Hunt later tweeted he had spoken to Iranian Foreign Minister Mohammad Javad Zarif and expressed “extreme disappointment.” He said Zarif had assured him that Iran wanted to “deescalate” the situation. “They have behaved in the opposite way,” Hunt tweeted.

Just spoke 2 Iranian FM Zarif &expressed extreme disappointment that having assured me last Sat Iran wanted 2 deescalate situation they have behaved in the opposite way.This has 2 be about actions not words if we are to find a way through.British shipping must & will be protected

Two weeks ago, Britain’s Royal Marines seized an Iranian oil tanker near Gibraltar. It was carrying Iranian crude, and according to The Associated Press, Britain says it will not release the vessel unless it can prove it was not breaking European sanctions on oil shipments to Syria.

Iranian officials are defending the British tanker’s seizure. Zarif tweeted on Saturday that “unlike the piracy in the Strait of Gibraltar,” Iran’s action in the Persian Gulf served to uphold international “maritime rules.”

“It is Iran that guarantees the security of the Persian Gulf and the Strait of Hormuz,” Zarif continued.

Unlike the piracy in the Strait of Gibraltar, our action in the Persian Gulf is to uphold int’l maritime rules.

As I said in NY, it is IRAN that guarantees the security of the Persian Gulf & the Strait of Hormuz.

UK must cease being an accessory to #EconomicTerrorism of the US.

Iran’s seizure of the tanker is also prompting concern across Europe and in the U.S. In a statement, France said it condemns the action by Iran and expresses its “full solidarity with the United Kingdom.” Germany released a statement calling the tanker’s seizure “unjustifiable” and for Iran to immediately release the ship and its crew.

On Friday afternoon, President Trump commented on Iran’s actions as he departed the White House, saying, “We heard it was one, we heard it was two” ships that have been seized. He added that Iran is “nothing but trouble” and affirmed the U.S.’ close alliance with the U.K.

Iran’s seizure of the tanker escalates tensions in the region. Britain, France and Germany are signatories to the 2015 Iran nuclear deal, which Trump pulled out of last year. Under the pact, Iran agreed to curtail its nuclear work in exchange for the lifting of sanctions. The U.S. withdrew from the agreement in 2018 and again imposed economic sanctions on Iran.

Iran has since breached the terms of the agreement, enriching uranium past the limit set by the deal.

Last week, John Negroponte, former U.S. director of national intelligence and ambassador to the United Nations, told NPR that Iran’s breaches of the deal bring it closer to building a nuclear bomb.

“Enriching and stockpiling at levels higher than those agreed in the JCPOA [nuclear deal] would be a step toward nuclear breakout,” Negroponte said. “Iran’s newly-announced levels appear modest at the moment, but would become more concerning if there were further increases. Such steps would imply a willingness on Iran’s part to go all the way to construction of a bomb.”

The AP reports that Iran has been urging European nations to find a way around U.S. sanctions and notes Britain’s prominence in rising U.S. tensions with Iran.

One-fifth of the world’s oil supplies travel through the Strait of Hormuz, with tankers carrying crude from the Middle East to countries around the world. The waterway has been a focal point of escalating tensions between the U.S. and Iran.

This week, the U.S. said it is sending troops and air defense missiles to Saudi Arabia. Late Friday, the United States Central Command said it is working on a “multinational maritime effort” called Operation Sentinel “to increase surveillance of and security in key waterways in the Middle East to ensure freedom of navigation in light of recent events in the Arabian Gulf region.”