The CEO of German industrial giant Siemens sharply criticized President Donald Trump Saturday for a rally in North Carolina where Trump continued to attack progressive congresswomen after telling them to “go back” to where they came from, saying the president has become the “face of racism and exclusion.”

“It troubles me that the most important political office in the world is becoming the face of racism and exclusion,” Kaeser said in a Twitter post in German. “I lived for many years in the USA and experienced freedom, tolerance and openness as never before. That was ‘America Great at work’!!”

Kaeser was responding to a Twitter post by a German conservative politician, Ruprecht Polenz, who posted an article about Trump’s recent rally in North Carolina. Trump supporters yelled “send her back” after he continued to verbally attacked Rep. Ilhan Omar. Omar was born in Somalia and became a U.S. citizen when she was a teenager.

Polenz said Germany would have to take Trump back if such comments were serious. Trump’s grandfather Friedrich was born in Germany and emigrated to the U.S. in 1885.

Trump later tried to distance himself from his supporters chants, saying he disagrees and “was not happy with it”

Last Sunday, Trump lashed out at progressive congresswoman on Twitter, telling them to “go back” where they came from. Though he didn’t mention them by name, he was likely tweeting about Democratic Reps. Alexandria Ocasio-Cortez, Ilhan Omar, Ayanna Pressley and Rashida Tlaib. Ocasio-Cortez, Pressley and Tlaib were born and raised in the United States, while Omar became a U.S. citizen when she was a teenager.

Trump’s comments have been condemned by the leaders of European allies, including British Prime Minister Theresa May and German Chancellor Angela Merkel. May called the the president’s comments “completely unacceptable.” Merkel, during her summer press conference, said she stands in solidarity with the congresswomen.

Kaeser has in the past criticized Trump’s trade policies, but praised the president’s 2017 tax overhaul.

Siemens employs more than 50,000 people in the U.S. and has 60 manufacturing, digital and R&D locations in the country. A rival of General Electric, the company manufactures gas turbines and generators, wind turbines and rail systems among other businesses in the U.S.  Siemens says it has invested $40 billion in the U.S. over the past 15 years. The company’s U.S. subsidiary generated 4.3 billion euros ($4.8 billion) in revenue in the second quarter of 2019.

In May, the company announced it would cut 10,000 jobs worldwide in a major restructuring that includes the spinoff of its oil, gas and power generation business. 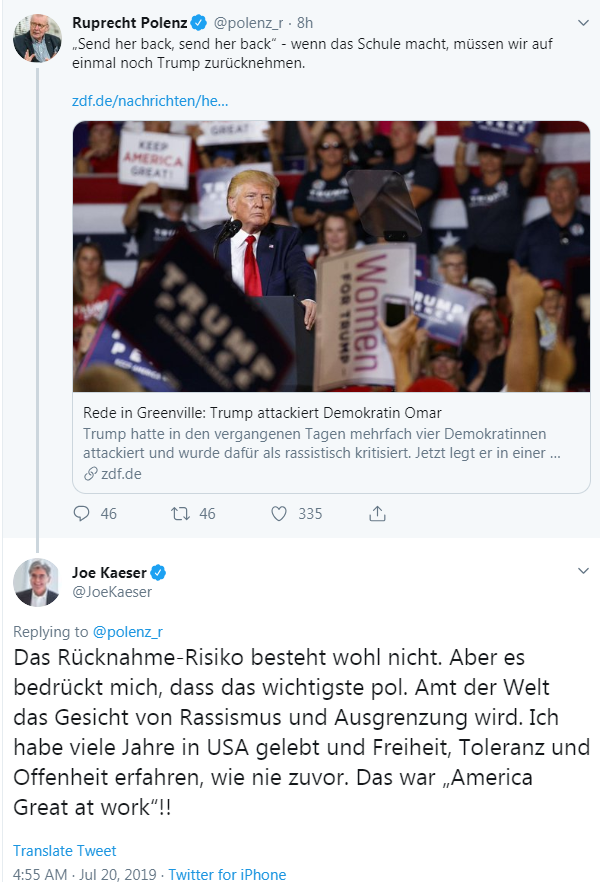