Through a webcast, a man at New Delhi’s Nehru Planetarium takes pictures of the liftoff of the Indian Space Research Organization’s unmanned spacecraft, launched Monday on a mission to the far side of the moon. 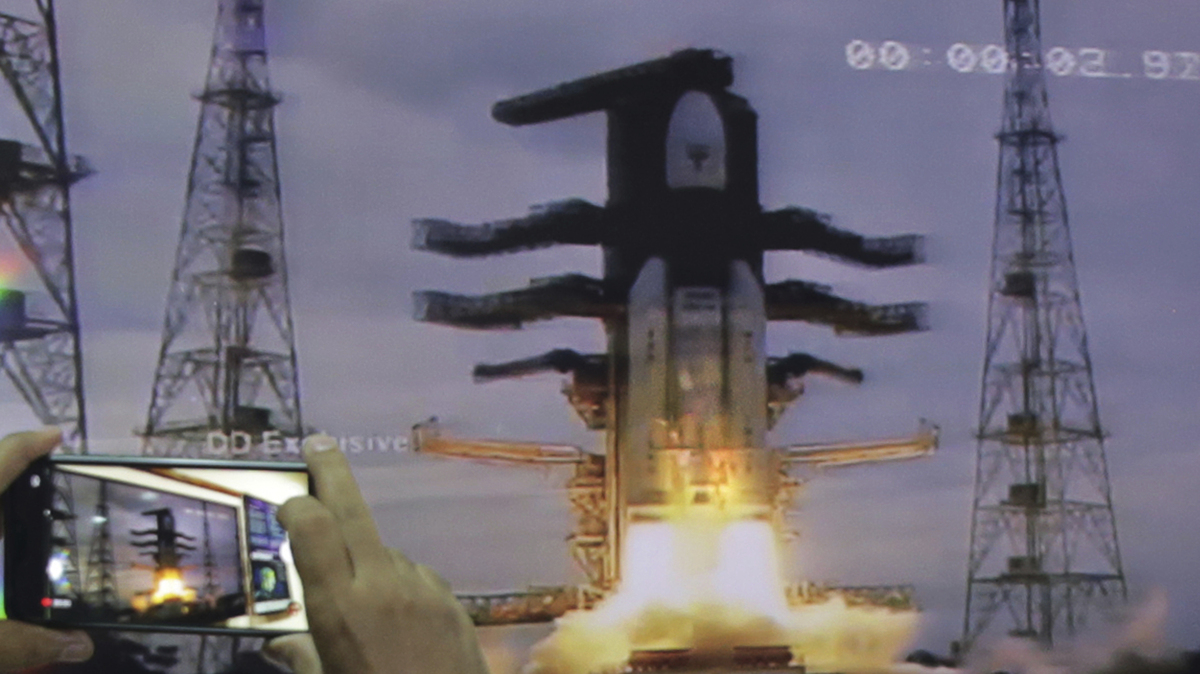 Through a webcast, a man at New Delhi’s Nehru Planetarium takes pictures of the liftoff of the Indian Space Research Organization’s unmanned spacecraft, launched Monday on a mission to the far side of the moon.

India is celebrating the successful launch of its Chandrayaan-2 rocket, which has now started its journey to the moon. It’s India’s second attempt to launch the unmanned lunar mission and to further its dreams of space exploration.

Chandrayaan-2, which means “moon craft” in ancient Sanskrit, launched as planned at 2:43 p.m. from the Satish Dhawan Space Centre on India’s southeastern coast. It is expected to make a soft landing in the moon’s south pole region in early September — a feat that would make India the fourth country to make a controlled landing on the moon’s surface, after the United States, Russia and China.

After the landing, a moon rover will explore water deposits India discovered on a previous moon mission, 11 years ago. That first lunar spacecraft, Chandrayaan-1, used radar to map the moon’s surface but did not touch down on the moon.

The new mission could help scientists chart potential sources of water and learn more about how the solar system formed billions of years ago.

The launch of Chandrayaan-2 comes on the heels of the 50th anniversary of the first humans setting foot on the moon, with Neil Armstrong’s historic moonwalk.

For years, India’s space agency has been known for operating on a shoestring budget. The current lunar mission cost about $140 million — less than Hollywood’s budget for the film Gravity, as NPR’s Lauren Frayer reports.

But frugality hasn’t stopped the agency from achieving success. In 2014, India became the first country to reach Mars on its first attempt, catapulting the nation to a new place among elite space explorers.

In March, as tensions with neighboring Pakistan flared up, Indian Prime Minister Narendra Modi announced that the country had successfully tested an anti-satellite weapon, shooting down one of its own low-orbiting satellites with a ballistic missile interceptor.

After Monday’s blastoff, Modi channeled Indian nationalism. “Special moments that will be etched in the annals of our glorious history!” he tweeted. The launch of Chandrayaan-2 was “a fully indigenous mission,” he added.

India’s space agency recently signed an agreement with Russia to train its astronauts for the mission, according to the Times of India. “I think it’s logical to go with Russia as it has been tried,” said Rakesh Sharma, according to the Times. Sharma is the first and only Indian citizen to enter space, having traveled aboard a Soviet rocket in 1984.