Opposition to the planned construction of the Thirty Meter Telescope on Mauna Kea has grown far beyond an intersection along Saddle Road.

Lawsuits, protests in other states, local boycotts and opposition from Hawaii and national politicians have all spread since Gov. David Ige last Wednesday issued an emergency declaration to help facilitate construction.

Ige’s cabinet members were in meetings most of Monday discussing the future of the project that would place the Northern hemisphere’s largest telescope on a site considered by many Native Hawaiians to be sacred, several government sources said.

The $1.4 billion project’s future has been in limbo for years.

After a decade of planning, and with potentially a decade more of construction ahead, the fate of the Thirty Meter Telescope is still uncertain.

The project’s conditional use permit approved by the Board of Land and Natural Resources in 2017 stipulates that construction must start by Sept. 27.

TMT attorney Douglas Ing said in an emailed statement that the corporation’s position is that construction has already begun. It’s just been delayed by contested case hearings, an appeals process for the permit and currently, many hundreds of protesters blocking access to the construction site.

TMT spokesman Scott Ishikawa said Monday afternoon that the corporation is still committed to putting the telescope on Mauna Kea.

“TMT has become an icon for larger issues within the community,” Ishikawa said. “We respect those who express opposition and understand the pain they feel. However, whether or not TMT is built will not bring closure to it. We remain hopeful that we can find a way forward, with mutual respect.”

While one person was arrested Saturday, there were no arrests around the intersection of Mauna Kea Access Road and Saddle Road on Sunday or Monday, according to a state news release. The state estimates there were about 1,500 people in the area Monday, down from over 2,000 over the weekend.

Three First Circuit Court judges are expected to issue an order Tuesday on whether Ige’s emergency proclamation should be halted.

Ige’s proclamation is set to expire Aug. 2, but he could extend it. The proclamation gives law enforcement broad powers to restrict access on Mauna Kea. Kopper argued that restricting access to the summit infringes on Neves’ rights to cultural practice granted in the state constitution. The state argues that right is not absolute.

Another lawsuit on Hawaii Island challenges the law enforcement response to protesters gathering around the mountain.

Kalani Flores filed a motion for a temporary restraining order against three county police chiefs, alleging that officers from the Honolulu and Maui police departments do not have jurisdiction in Hawaii County.

A hearing for the case is scheduled in that case Tuesday morning. 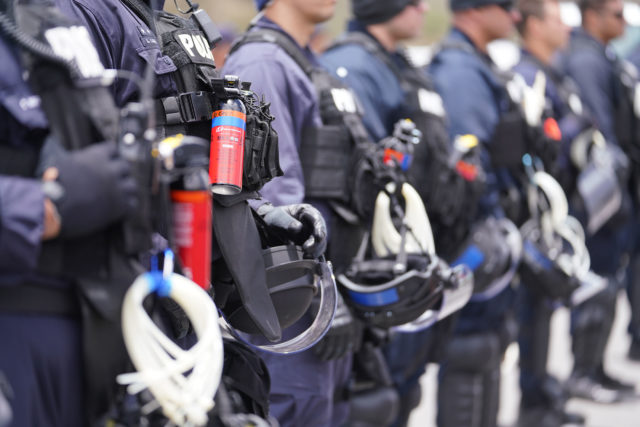 HPD sent 56 officers to Mauna Kea last Tuesday to provide assistance to Hawaii County police, HPD spokeswoman Sarah Yoro said in an email. The officers were expected back in Honolulu by Tuesday.

In a letter to Honolulu Police Chief Susan Ballard, City Councilman Ron Menor asked why the officers were sent since the project is under the state’s jurisdiction, who fronted the costs for the trip and how the action affected operations on Oahu.

The Kauai Police Department was never asked to assist with operations on Mauna Kea, according to Kauai Police Chief Todd Raybuck, who said, “At this time, I have no plan to send police officers to Hawaii Island nor do I have the staffing to send officers.”

Law enforcement in the vicinity of Mauna Kea includes officers from the state Department of Land and Natural Resources Division of Conservation and Resources Enforcement, state sheriff’s deputies from the Department of Public Safety, investigators with the AG’s office and about 80 National Guard members all on hand to assist the flow of construction vehicles that have yet to appear.

Ige said Friday that no more National Guard troops would be ordered to the mountain. He also said that law enforcement never intended to use tear gas on the protesters, who call themselves Kia‘i, or protectors of Mauna Kea.

However, Deputy Attorney General Craig Iha said in a court hearing Monday that officers were prepared to use tear gas if they felt it was necessary.

“The governor spoke, and if tear gas isn’t going to be used, that’s how it is,” Krishna Jarayam, a spokesman for the AG’s office said.

Jarayam wouldn’t say whether or not officers on Mauna Kea were equipped with tear gas. Honolulu officers, however, were seen with spray canisters.

A growing number of Hawaii politicians have come out in opposition to Ige’s emergency declaration, including U.S. Rep. Tulsi Gabbard and Lt. Gov. Josh Green.

Green’s support for the overall project is waning, and he said the telescope might have to be moved to a different location if a peaceful resolution can’t be found, Hawaii News Now reported. Green previously said that the National Guard should not have been deployed, KITV reported.

Green says Native Hawaiian protesters on the mountain aren’t leaving and that it’s time for a “grand reconciliation” with Hawaii’s “host culture.”

He says that includes taking a strong state position on federal recognition for Native Hawaiians and moving more aggressively to provide house lots through the state Department of Hawaiian Home Lands.

Over the weekend, the state Senate and House Native Hawaiian Caucuses asked Ige to rescind the emergency declaration in order to deescalate the situation on Mauna Kea. 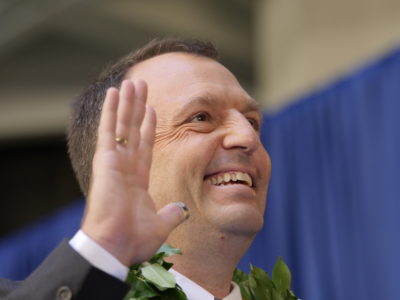 Lt. Gov. Josh Green, inaugurated in December 2018, has opposed Gov. David Ige’s emergency declaration and use of the National Guard.

“The Hawaiian culture is one of aloha and respect,” state Rep. Dan Holt of Honolulu said in a written statement. “These values must be present in all that we do. It has become evident from the number of demonstrations across the State that the events on Mauna Kea impact all residents of Hawai‘i, whether or not they are of Native Hawaiian ancestry.”

Thirteen other lawmakers issued a separate statement Monday that asked Ige to rescind the emergency declaration. Their letter says use of a tool typically reserved for natural disasters to quell a peaceful protest violates the intent of the law.

The protest has also caught the attention of at least two leading candidates for the Democratic presidential nomination.

Vermont Sen. Bernie Sanders expressed support for the protesters in a tweet Friday morning before it was mysteriously deleted several hours later.

On Monday, Massachusetts Sen. Elizabeth Warren tweeted that “I stand in solidarity” with the Manua Kea protesters.

“The Hawaiians who have been protesting construction of the Thirty Meter Telescope are trying to protect a sacred site from further desecration,” Warren said.

Old Lahaina Luau on Maui called off its nightly luau, leading to cancellations for 450 people. Because the show is sold out through the middle of next month, it wasn’t able to accommodate most guests on another night.

The company acted because it believed most of its employees would likely have decided to join the boycott regardless.

“So we decided, you know what, it would really show our support to our employees and at the same time reflect our support to Hawaiian culture for us to have everyone be able to take off that day,” said Kawika Freitas, director of public and cultural relations at Old Lahaina Luau.

Skyline Hawaii suspended zipline rides on the Big Island, Kauai and Maui. It cancelled bicycle and van tours to the summit of Haleakala, Maui’s tallest peak, and to the small town of Hana. The decision affected several hundred customers.

“We did have a few people that were a little bit upset, but 90 percent of the people were very understanding,” said Jennifer Puha, who works in reservations.

“He feels that we have a duty to stand by doing the right thing,” she said.

Both Skyline Hawaii and Old Lahaina Luau were to resume normal operations Tuesday.

Other businesses that promoted their participation in the one-day boycott on social media Monday include Valley Isle Excursion, U’i Gallery and Feast at Lele, all on Maui, and Nicoco Hawaiian Gelato on the Big Island.

The boycotts followed a Sunday filled with protests in Waikiki, the heart of Hawaii’s tourism industry.

Demonstrations against the TMT have spread from Hawaii to New York, Las Vegas and elsewhere.

In Nevada, a few hundred Native Hawaiians and former Hawaii residents gathered under the famous “Welcome to Fabulous Las Vegas” sign to show their solidarity with protesters back home.

A demonstration was also planned at the University of California Berkeley over the weekend.

And a letter penned by students from Berkeley and Caltech now has over 140 signatures from other students and staff at universities in the U.S. and Canada that are affiliated with TMT.

“We write today not to place a value judgment on the future of TMT on Maunakea, but to question the methods by which we are getting the telescope on the mountain in the first place,” the letter says.

Chad Blair, Brittany Lyte and the Associated Press contributed to this report.

Sign up for our FREE morning newsletter and face each day more informed.